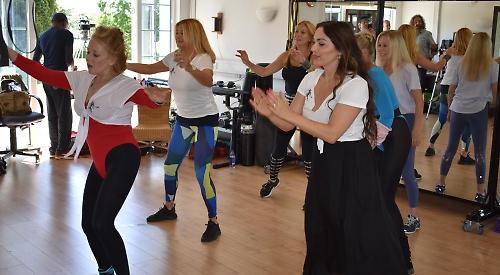 The women were raising money for Icarus, a charity that helps servicemen and women as well as other uniformed personnel who are suffering from post traumatic stress disorder.

The women wanted to raise awareness and support for the charity, which provides immediate care, assessment and rehabilitation, and danced to Seventies music, as well as contemporary hits.

Some wore leotards in the style of decade, as well as t-shirts with the charity’s name on them.

They were joined by publicist Rhea Elliott, who organised the fundraiser, and Lynne Lambourne, from Peppard.

They danced with zumba instructor Anne Haberfield for an hour via a live stream and dance instructor Hannah Collins for a second hour on Saturday. They have raised more than half of their £3,000 target.

Ms Elliott, who danced for a total of four hours, is an ambassador for Icarus and also volunteers as a therapist.

She said: “The women are fantastic. I think it went really well. It was not only fun, but it was quite unique. Icarus is a small charity that has been going since December 2017 but they have tripled in size since March this year and are in desperate need of financial support to help them do the amazing work they do to help our uniformed services, veterans and their families.

“The rate of increase in veteran suicides has shocked us all and we need to do more to support these people who put their lives on the line to keep us safe and this is one small way for us to do that and give something back.

“I decided to do something fun with friends of mine to help raise much needed money for this amazing small charity.”

Ms Elliott streamed the event via her Instagram on IGTV so that supporters could watch and donate. Tarrant, the former wife of radio and TV broadcaster Chris Tarrant, said: “I thought it’s such a good cause, really worth supporting, so here I am.

“It’s a bit odd not dancing with a partner. I was going to get one of those dance with me dolls! I’ve got stamina, I’ve done marathons and I have climbed Kilimanjaro so I know I can handle that.

“Hopefully the music will be more my era so then I can feel I’m back in the disco and then the muscle memory might come back.”

Tarrant said she knew all of the women well and had known Johnson since the Seventies.

“I’ve probably known Jilly the longest,” she said. “I rented a flat from a model friend of hers and we crossed paths.

“The first time I met Angie we were doing a fairly similar thing. I was doing TV-am at the time and it was swimming for charity. That was in the early Eighties.

“It’s lovely to get together again, especially with lockdown.”

Buxton, who presents My Greek Kitchen and My Cypriot Kitchen, brought along fig and feta tarts and apple spiced muffins for the other dancers to try.

She also said the charity was a “great cause” and wanted to help. “It was absolutely fine and I could have gone on really,” she said. “It wasn’t an Iron Man triathlon.

“They are a great bunch of women and at this particular time of life, because we haven’t seen each other for such a long time, that was really nice. All of us are bonkers so that’s why it worked quite well.

“The whole point of it was to raise money for a really important charity and charities are suffering at the moment and Icarus is really suffering.

“We enjoyed it and we got to raise the profile and money for the charity. It was important to do.

“I didn’t get any Eighties music but I’m a real retro girl at the best of times. I grew up listening to Fifties and Sixties music, so Seventies is still positively modern for me.”

Johnson added: “It was great, I loved it. It was just like the old days.

“The only trouble is I’ve got a damaged cartilage so I wasn’t bouncing around too much. I was being cautious.

“I like to get behind some of the charities that don’t have much help, much government input, because it’s a nice thing to do.

“I haven’t seen the girls in quite a long time actually, especially Ingrid, I haven’t seen her in years and Angie. It was a bit of a giggle actually and we really enjoyed ourselves.”

Mrs Best, who had already danced for an hour before the others arrived, said: “Rhea called me and asked and said ‘it’s all of the old girls from the Eighties’ and so you can’t say no to that.

“My feet don’t move, I’ve got two fake hips but you’ve just got to make an effort for the charity because it’s so worthwhile, especially right now with what’s happening.

“When the girls got here I was ready for another round! It was lovely to see them all, it’s very motivating.”

The woman had their hair and make-up done by make-up artist Stephen Hamilton.