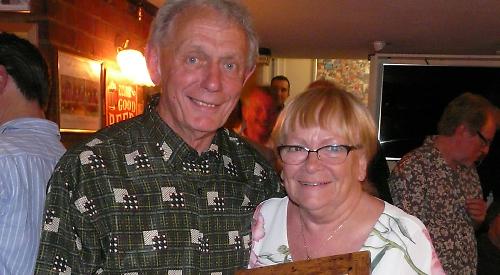 THE landlords of a Henley pub have celebrated their golden wedding anniversary.

They celebrated their anniversary with a weekend away in North Yorkshire.

Mrs Steward said: “We stayed at a really nice hotel called Swinton Park. We went on lots of walks and had some nice meals.”

The couple dated for about four years before they were married.

Mr Steward said: “Celia used to work with a friend I played rugby with and he thought we’d be a good match so set up a blind date.”

The couple have three children, Gary, Natalie and Carly and two grandchildren, Louisa and Antony.

Mrs Steward said: “I have so many highlights from over the last 50 years. Some of the memorable ones are having the children and them getting christened and married.

“We have had some wonderful holidays with the children as well. My favourite holiday was to Sri Lanka for our fifth wedding anniversary.”

Mr and Mrs Steward have run the Bird in Hand, where they also live, for 26 years.

It has been named the best pub by the South Oxfordshire branch of the Campaign for Real Ale a record six times.

Mr Steward said: “Since we’ve been in Henley we’ve met all sorts of lovely people and that’s what keeps us going.”