Year-long labour of love brings home up to date 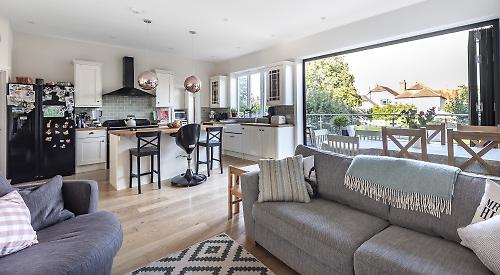 WHEN the Huggards bought their first house together in Henley they thought they would never leave.

They spent a year remodelling and modernising the property in Belle Vue Road to their tastes, which included adding an extension and increasing the number of bedrooms.

But after eight years they have decided to sell up as Rowan and his wife Fiona and their two young daughters are moving to Rotherfield Peppard, not far from where he grew up.

Mr Huggard said: “We bought the house in August 2012 as the first house that my then girlfriend, now wife, and I bought together.

“It was then a three-bedroom semi-detached house, which was very much a period property with features including a hatch from the kitchen to the dining room.

“You had to go out of the kitchen and towards the front door to get into the dining room. It was a characterful house but it wasn’t a modern or practical one.

“Having said that, my wife and I do like a bit of character and we have retained as many of the original period features as possible, such as the fireplaces. We have also put in a log burner in the lounge.

“We have tried to keep the design features that define the period the house was built in but brought it up to modern standards with modern building materials.”

The couple began building an extension in early 2016 because they were intending to have children, which increased the number of bedrooms to five. It took about a year from start to finish and involved an almost complete reconfiguration of the house.

Mr Huggard said: “At one stage we had the front and some roof rafters and that was pretty much it. The entire place was gutted.

“The original house was built in the Forties and you could go to the corner of each room and put your hand down to the skirting board and feel a cold breeze through the old floorboards because there was no insulation.

“One of the first major things we did was drop the level of the kitchen, which has created quite a cavernous feel with 14ft ceilings. This created so much space and really opens up the room. We also have big bi-folding doors that lead out to a deck and the garden and that allows us to keep an eye on the children.

“The kitchen and dining room are really the focus of the downstairs. It has wooden cabinets and worktops and a wooden floor, which gives it that country feel.

“We also have a more formal sitting room but we try to keep the kids out of there.”

The decking area is used as an extension of the kitchen and dining room and it stretches across the entire width. On it there is a seating area, a table for dining and a barbecue.

Mr Huggard said: “The decking was engineered. Although it is wood effect, it is made using recycled plastic and rubber — it is fantastic material.

“It doesn’t deteriorate or get slimy and slippery like more traditional wooden decking. I haven’t had to wash it in four years.

“When the weather allows, those doors are open first thing in the morning until the sun goes out or someone goes to bed. It is a very open plan area, which turns that outside area into a garden room.”

Upstairs is where the Huggards made some of the biggest changes.

Mr Huggard said: “What we have done is extend the master bedroom, which has a dressing area with fitted wardrobes that leads to an
en-suite that we created.

“We also put an en-suite in the second bedroom, which my mother uses when she comes to stay. It’s known as ‘Granny’s room’.

“We added two more bedrooms while making the old box-room bigger so all five bedrooms are of a good size.”

Outside, the couple landscaped the large back garden, which needed some tidying up.

Mr Huggard, who owns an IT consultancy, said: “The garden area was a bit of a mess with concrete hard standings for old sheds and an old compost heap that had never been emptied.

“We created a small patio at the end of the garden with a table and chairs as in the evenings it captures the last of the sun and is a great place for a gin and tonic.”

Mr Huggard said it would be a wrench to leave their home because they put so much into it.

He said: “When we did the redesign, we 100 per cent believed that we would be here for the rest of our lives. This wasn’t a development project or done to try to maximise profits. We designed the house on our own terms and each part of it was considered and thought out with no expense spared.

“There will be tears in our eyes when we move as we put our heart and soul into it and this project of ours will be hard to walk away from because it was our complete vision.”