Henley batsmen struggle as side misses out on cup 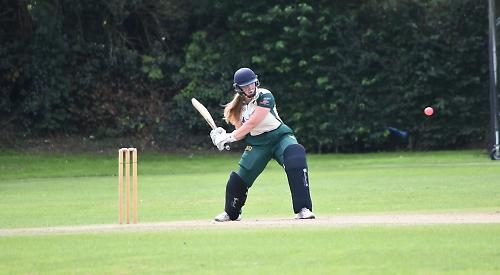 A SECOND defeat in as many weekends put paid to Henley’s chances of competing for the John Goodman Cup and left them in sixth place in the Pooled League from where they will contest the Plate competition instead.

Although this was a game that Henley will want to forget in a hurry, Henley’s performance in the field against a strong High Wycombe side was of the highest order and paved the way for a likely win.

Unfortunately, the home side, missing five regular first team players, could not match what they had done with the ball with the bat.

It had all started well enough with Wycombe winning the toss and opting to bat. Tom Nugent and Andrew Rishton were on the money from ball one and it was not until the sixth over that Eliot Callis found the boundary with a mighty six over mid-wicket.

By then, his fellow opener Woodland was back in the hutch thanks to a sharp low catch by Henley skipper Mike Roberts at second slip.

What followed was Wycombe’s most fruitful (55-run) partnership between Callis and his skipper Marles until the spin of Ali Raja put paid to both in successive balls, Callis was caught just inside the boundary at long-on by Matt Rowe and Marles was stumped.

That made it 60-3 which was the cue for Felix Watson-Smyth, who was making his debut for the first team, to impose himself on the game with his left-arm spin. Four wickets came his way, conceding just over two runs an over from his spell.

The returning Raja snuffed out the only real challenge from the lower order in the form of Tom Hampton and Watson-Smyth ran out Parry to end the innings .

In reply, Rowe was unable to blossom as he was caught behind off the pacy Parsons, Roberts was strangled down the leg-side whilst Parson’s cleaned up Richard Morris.

That was the beginning of the end as spinner Conor Haddow (4-18) ripped out the middle to lower order Woodland joined in to remove Watson-Smyth and Adam Lubbock and it was all over in 20.3 overs, just 10 runs more than Henley’s all time Home Counties Premier League lowest score of 49 in 2001.

After the game skipper Mike Roberts said: “Although a disappointing end to the competitive season, there are plenty of positives to take forward into 2021.”

Meanwhile, Henley Women booked their place in Division 2 final after defeating Ballinger Waggoners on Sunday in the semi-final play-off.

Ballinger won the toss and invited Henley to bat with openers Heather Bonnell and Lucy Beal getting off to a dynamic start with 16 runs scored from the first two overs.

Beal fell to one that kept low in the third over and Bonnell was joined by Helen Webster with the pair adding a partnership of 25 before Webster was bowled.

Jemma Swire-Thompson joined Bonnell and both kept the run rate ticking over well until Bonnell was bowled. Charlotte Clarke and Swire-Thompson then went on to put on a crucial 59-run partnership that took Henley to 113 before Clarke was caught and Swire Thompson bowled on the following ball in the 22nd over.

With three further wickets lost in quick succession and Henley closed on 158-9.

Henley got off to the best possible start in the field when a Hayward in-swinger removing the bails from her first ball, which was followed by a sharp run out from Alyx Clarke in the second ball.

Hayward struck again in the third over, again bowled and wickets continued to tumble with catches from Beal, Webster and Brown off the bowling of Manek and Lauren Hilditch. Three wickets from left arm spinner Alyx Clarke ended the chase with Ballinger all out for 42.

Tomorrow (Saturday), Aston Rowant visit the Brakspear Ground in the semi-final of the John Goodman Plate competition against Henley men, which is scheduled to start at 11.30am.

On Sunday Henley Women play Hitchin Women in the Division 2 final at the same ground from 1pm.