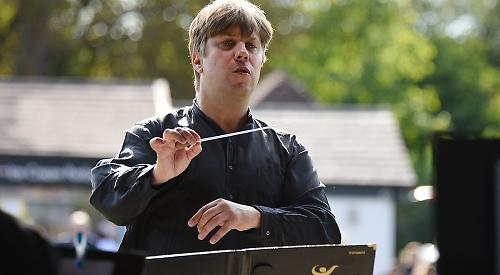 ABOUT 150 people attended a free classical concert by the river in Henley on Saturday.

The event in Mill Meadows was organised by the Henley Choral Society and featured a 90-minute performance by the Orpheus Sinfonia Orchestra.

Visitors brought their own chairs and blankets and gathered around the bandstand for a 2.30pm start.

There was a team of volunteers acting as marshals to encourage social distancing.

The audience was welcomed in glorious sunshine by Peter Asprey, director of music at the society, who said: “There really is nothing quite like live music and it is certainly something that I’ve missed.

“I’m glad we are also able to give the orchestra the chance to do what they do best.”

The concert opened with a rendition of Don Giovanni Overture by Mozart.

This was followed by Summer from The Four Seasons by Vivaldi and Toreador March from the Carmen Suite by Bizet.

The Wedding March by Mendelssohn was one of the more familiar arrangements, while the finale was Somewhere Over the Rainbow from The Wizard of Oz.

The society had booked the orchestra to play at its spring concert in March but this had to be cancelled due to the coronavirus pandemic.

Susan Edwards, who has chaired the society for five years, said: “We have never done anything like this but I think it was a triumph and we might do it again.

“The orchestra loved coming to Henley and it was a completely different repertoire to what they would have done for the March concert.

“I asked the orchestra if they could play something that we would have had from the spring concert, Ave Verum Corpus by Mozart.

“We were going to pay them anyway as we wanted to honour the financial part of the contract, but thought maybe they would like to play for their money and they jumped at the idea.

“It was absolutely magnificent. The feedback we received was that both the orchestra and the atmosphere were superb.”

Henley Town Council gave permission for the concert to be held in the meadows.

“They were very helpful,” said Mrs Edwards. “Our concert manager, Jane Hutton, also worked very hard on this. We hired chairs and the electrics from Henley Theatre Services and we were there from 10am sanitising and making sure everything was safe and compliant.

“I went down to measure up the bandstand to work out how many orchestra members we could have for social distancing.

“There is always a lot to think about with a concert but even more this time because of covid.

“To make it simple, I said there should be no charge and no money being exchanged and no tickets or programmes, just to reduce the risk of passing covid on.

“Everyone was behaving and nobody had to be asked to move.

“What I liked was that some people knew about the concert and had planned to come and there were other people wandering by who stopped and sat on the grass to listen. It must have given such a good impression of Henley.”

Rosemary Woodroffe, who has been singing with the society since 1976, said: “What a stunning way to spend a Saturday afternoon.

“It is well overdue given the year we’ve had and it is wonderful to be together even though everyone has to be kept apart. We have been doing Zoom rehearsals since March but it is not the same as being here and seeing everyone face-to-face.

“They really worked hard to make sure everyone was safe and it was beautifully organised.”

Ben Willey, of St Andrew’s Road, Henley, said: “It was fantastic. It is great that it could be put on and despite social distancing, the people of Henley could get back together to enjoy some great music.”

Diana Bentley, of Strathmore Drive, Charvil, who was at the concert with her husband David, said: “The setting is fantastic and the sun is shining — you can’t beat that.

“We both feel very safe and it is nice to be able to hear some live music again after so long without.”

Mrs Edwards, who is stepping down from her role, was presented with flowers at the end of the concert as a thank-you for her service.

She said: “It was a massive surprise to be asked to go up to the front. There were a lot of people from the choir there, so they thought it would be a good opportunity to thank me.”

The society is a registered charity with about 120 members as well as a youth choir with around 30 members aged seven to 17.