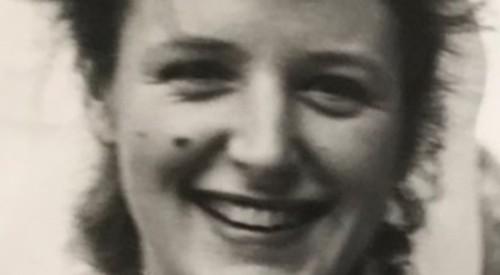 BRENDA CLOKEY, who for many years lived in King’s Road, Henley, was well known to many around the town as “Granny Brenda” as she stood in the school pick-up queue to collect her grandchildren, Tom and Daniel, from Rupert House School in the early 2000s.

Brenda was born Brenda Buckton in Buenos Aires, Argentina, in 1926, the eldest child of Jack and Isabel Buckton.

Her father had travelled to Argentina with the Bank of Argentine, where he met Isabel Comber, from a second-generation Anglo-Argentine family living in the capital.

Brenda moved back to England with her mother in the Thirties. Shortly afterwards, she suffered the trauma of hearing that her father had been lost in a light aircraft crash in the jungles of Costa Rica, only for him to miraculously emerge many months later, alive and well, though changed forever into a very pious and deeply religious man.

After school in Cambridge, where her brother David was an undergraduate, Brenda was plunged into wartime Britain as a student nurse at the Queen Mary’s Roehampton Hospital.

She was based in the pioneering maxillofacial burns and rehabilitation wards.

It was in this hospital after the war that Brenda met her future husband Kenneth, then a captain in the Royal Ulster Rifles, who was recuperating after contracting typhus following his participation in the liberation of Bergen-Belsen concentration camp.

Brenda subsequently married Kenneth Clokey in 1948 and moved numerous times around London as he resumed his medical studies as a trainee surgeon at Guy’s Hospital before settling in Sanderstead once he had obtained a licence in dental surgery in 1953.

Brenda’s only child John was born in 1960 and she blended being a mother with supporting her husband’s dental practice both as a nurse and receptionist, becoming one of the early “multi-tasking” mums.

In the Seventies and Eighties, Brenda filled her time as a governor at Atwood Primary School in Croydon, a registered Samaritan and an active volunteer fundraiser and treasurer for Dr Barnardo’s.

During this period, she and Kenneth were regular visitors to the stewards’ enclosure at Henley Royal Regatta along with other members of the Croydon South Rotary Club.

At this time Brenda’s attraction to Henley developed to the extent that when Kenneth died in 2002, she followed his long-time suggestion and moved to be near her son John and his wife Vicky and family in the town.

Brenda soon settled into Henley life and joined Ladies Probus at Badgemore Park as well as the Phyllis Court Club, where she loved entertaining friends and family in its elegant grounds and function rooms, including holding her grandson’s 18th birthday celebration and her own 90th.

Brenda was in her late seventies when she and her sister Annette undertook a visit to her birthplace in Buenos Aires, allowing her the great privilege of meeting numerous family members for the first time.

Not long after celebrating her 80th birthday, aboard Hobbs of Henley’s magnificent The New Orleans, Brenda was, sadly, diagnosed with late onset Parkinson’s disease.

Nonethelss, she was determined to make the most of her later years and could regularly be found striding down the towpath from Leander Club to the Flower Pot for lunch, or supporting lock transits up to London with her close friend Graham on his Henley-based barge, Rocco 2000.

A regular attendee at Holy Trinity Church in Church Street, Brenda also delighted in being recognised and hailed as “Granny Brenda” in Waitrose, or just walking around town, even though she admitted that she could not always remember all the names of those who greeted her this way.

In her final years, after the death of her friend Graham, Brenda became unable to cope with the King’s Road three-storey town-house and moved to the newly opened Chiltern Court Care Centre.

Brenda soon built a great rapport with her nurses and carers and they would regularly help her “escape”, wheeling her stroller down to her beloved Waitrose, Holy Trinity or to the bank.

Brenda was also very well looked after by the clinical Parkinson’s and neurological team who were often amazed by her mental strength and almost Lazarus-like recoveries from underlying infections that so often afflict the elderly.

Brenda died peacefully, aged 94 and with her son at her side, on September 17 after a long and wonderful life.