Spacious rooms make listed manor a home for all seasons 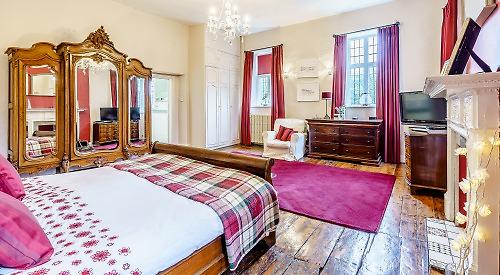 A HUSBAND and wife who have enjoyed hosting large parties at their Grade-II listed home in Hurst are now looking to downsize.

They moved into High Chimneys in Davis Street in 2014 as a place to raise their children.

But now they feel the time is right to move on as their teenagers are beginning to spend less time at home.

The couple own the south wing, the major portion of the two-part Jacobean/Edwardian property.

The owners say: “When we first saw the house and walked into it we just fell in love with it — the high ceilings and the space. It is a really big house but it hasn’t got many rooms, although the rooms are huge. It is an amazing house to live in.”

Part of the draw for them was the “attractive” period features such as exposed timber, leaded light windows and window shutters, original fireplaces and solid oak floors.

But once they moved in, the couple set about converting the cellars to create more living space.

The owners say: “The cellars were two large brick rooms and we wanted to make them useable. Tanking them to convert them allowed us to create a den for the kids and for me to have a large utility room, which is one of my favourite rooms in the house.

“This is fitted with proper units and is where I dry all my clothes and so it doesn’t clutter the rest of the house, which I have always found to be an issue in other houses.”

Also on the ground floor is a kitchen/breakfast room, with a four-oven Aga.

The owners say: “We updated the kitchen, put in granite worktops and an island in the centre while upstairs we also put in a new bathroom for the kids.”

The children each have a double bedroom on the top floor, one of which is en-suite, and they lead off from another double room, which could either be used as a sitting room or a fifth bedroom.

The principal bedroom and second bedroom are on the second floor. Both have feature fireplaces and en-suite bathrooms with free standing baths. There is also a separate family shower room.

The first floor features a drawing room, and a dining room, both with fireplaces and a study which is big enough for two workstations.

The owners say: “The house would be fantastic for a family as there are lots of rooms for people to have their own space. I do a lot of my own work in the kitchen but we have a large study and other rooms that could be used. The rooms are all very flexible — the sitting room on the top floor where the kids’ bedrooms are could become a sixth bedroom if it was needed.

“Outside there is a large garage and four stables which also have potential to be developed.”

For the couple, High Chimneys is a great place to entertain and they like to make the most of the outside space.

The front of the house has a flagstone terrace. The principal lawned gardens lie to the rear with mixture of herbaceous borders and mature trees, providing several areas for al fresco entertaining including a Julian Christian garden building with

dining seating for 10. The owners say: “It is an amazing house to live in during the summer because the garden is gorgeous and there are different areas where we have seating. There is a bar and a Julian Christian building where we sit and watch the sun go down at the end of the day. It is a great space to entertain family and friends and we have had massive parties.

“Once you get past summer you then think, oh I can put the fire on tonight and it becomes a different sort of house. In the winter it is fabulous, too, because it is a really warm house with fantastic original fireplaces. In the dining room, with the fire going, we have had great dinner parties and Christmases together.

“The house has a very country feel, you’re close to Dinton Pastures Country Park and the garden has formal parts and less formal parts. There are eight troughs for growing vegetables, there are chickens and a cricket net, which is separate to the more formal lawned area.”

She added: “Downsizing is the right thing to do. We will be sad to leave but I’m thinking with my head and not my heart.”