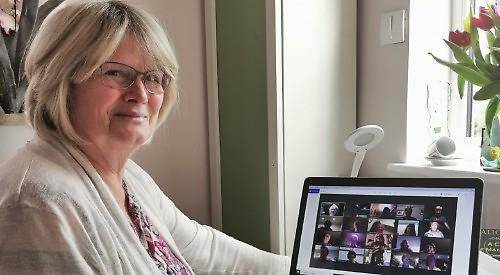 THE Henley and Peppard branch of the Royal British Legion has appointed a new chairwoman.

Anne Evans, who has been a member of the branch’s organising committee since 2000, formally took over from John Green at the group’s  annual meeting, which was held online.

She was put forward for the role at the start of the year, having previously served as treasurer and secretary, and accepted after
learning more about it.

Mrs Evans, who lives in Wilson Avenue, Henley, with her husband Dan, will juggle her duties with her other role as long-standing director of Henley chamber choir Aliquando.

She said: “John announced he was stepping down at the beginning of the year and it has taken several months to get my head around the job.

“I was a bit dubious to begin with because I thought you needed a military background but I agreed when they assured me they were looking for someone with a different outlook.

“It’s not something you take on lightly and John will be a hard act to follow but I’m really looking forward to it and I know I’ve got plenty of support from the committee. It is a challenging time for charities because of the coronavirus pandemic but we will be staying in touch and looking out for one another.”

Mr Green, 85, who lives in Maidensgrove, will take over the role of president from Lt Col Peter Blaker, who was appointed to the role when his predecessor Brigadier Malcolm Page MBE stepped down last year.

Lt Col Blaker, from Rotherfield Greys, will serve as branch patron while Brig Page, who lives at the Chiltern Court Care Centre, off York Road, Henley, will remain on the committee to give advice, as will Mr Green.

Mr Green, who was previously treasurer of the Oxfordshire Legion, said: “I plan to stay just as active as before but I won’t miss the administrative work that my role involved. We’re very pleased to have appointed a woman because there’s a misconception that the Legion is run by elderly ex-servicemen but that’s not the case at all — our members and speaker secretaries are both women and they’re our most active members.

“Anne ticked all the boxes when we were considering candidates as she has tremendous organisational abilities and is very enthusiastic with, perhaps most importantly for this job, a wonderful sense of humour.”

The branch launched this year’s Poppy Appeal on Saturday with a low-key, socially-distanced ceremony in Henley market place.

This year the Legion’s volunteers can’t collect door-to-door because of the risk of spreading coronavirus but they hope to make up for this by placing more poppy trays in shops and other public spaces.

Mr Green said: “There’s still a lot of confusion around and we want people to know that poppies are still available, so they should visit their local shops.”