Charlie back on his feet 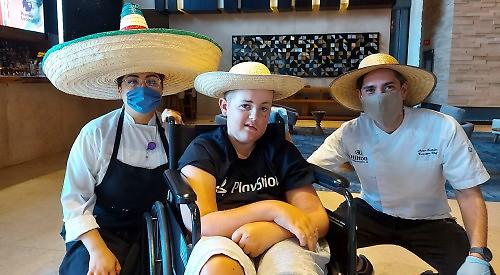 A BOY who suffered mobility problems after his latest round of cancer treatment is up and walking again.

Charlie Ilsley, 13, from Emmer Green, was left with weak and numb legs and unable to walk unaided after having immunotherapy treatment in Mexico City.

It caused inflammation near his spine so he needed a wheelchair to get around.

Now he is back home and able to walk again after he was prescribed steroids to tackle the inflammation by his consultant at the John Radcliffe Hospital in Oxford.

This was much to the relief of his parents, Mark and Toni.

Mrs Ilsley said: “Charlie’s consultant rang me and asked, ‘How is he?’ and I said he couldn’t really stand up and that it took me, Mark and my son Ollie to get him to the toilet. I told him, ‘He can’t walk’.

“The treatment causes inflammation but where Charlie’s tumour is on his spine he can’t afford inflammation because it could permanently damage his spine.

“We don’t want to take all the inflammation down because that’s how immunotherapy works but we need to make sure it’s not too much. In a way we want it but we don’t want it too much.”

Once the steroids began to work, Charlie was able to move his legs and felt much better. Mrs Ilsley said: “I went to wake him up in the morning and he was lying in bed with his legs up in the air. In the afternoon I managed to get him down the stairs by myself.

“The next day Charlie said to me, ‘This is the best day of my life’ because his brother had just bought an Xbox game and I got him six Krispy Kreme doughnuts and his favourite milkshake. He’s on steroids and eats so much.”

Meanwhile, the Red Arrows have sent Charlie a video message and signed merchandise.

Charlie, who is not showing any symptoms, is a pupil at Highdown School in Emmer Green but can’t attend as he needs to isolate to protect him from coronavirus. The family will return to Mexico next month for another scan to see if the treatment has worked.

Charlie was first diagnosed in 2015 and had surgery, radiotherapy and then chemotherapy before being given the all-clear.

Then in 2018 two tumours were discovered on his spine. He had specialist radiation treatment in Turkey before being given the all-clear for a second time in August last year.

In November last year, the Ilsleys were told the disease had returned after a lumbar puncture showed cancer cells in his spinal fluid. He had more chemotherapy and immunotherapy treatment but it failed.

Since then he has been having
CAR-T cell treatment, a form of immunotherapy, in Mexico.