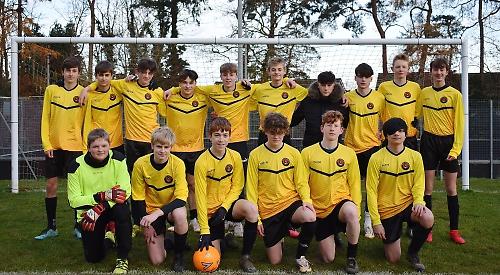 THE AFC HENLEY HURRICANES U14 season returned to action with a convincing 9-0 friendly victory against the U15 BURGHFIELD BUFFALOES on Saturday.

The Hurricanes were playing on a freshly laid pitch at Jubilee Park and wasted no time in exploiting it.

New signing Max Stokes powered his way through the midfield before hitting a strike which came off the post but Christian Rowbotham was on hand to smash home the rebound to take the lead.

Harvey Herbert doubled the lead after hitting an unstoppable shot before turning provider. He jinked past two Burghfield defenders before crossing for Sam Archibald to finish from inside the six-yard box.

Burghfield did have their moments in the first half but the Henley defence kept them out. Olly Saunders had to make a last-ditch tackle to stop a certain goal and Matthew Dippenaar had to be at his best to keep out the visitor’s tricky right winger. Joe Winpenny, playing at centre back, marshalled the back line well.

It wasn’t long before the hosts got back on the goal trail. Henry Mendelssohn left a Burghfield defender for dead and then produced a 25-yard chip to make it 4-0. Herbert then completed the first half scoring to make it 5-0 at the break.

After the restart, Ben Horner had to make a save to keep his clean sheet intact and his distribution exploited the gaps in the Burghfield back line.

Tom Atkinson was causing the Burghfield defence all sorts of problems as his probing through balls set up plenty of attacks.

He was fouled 25 yards from goal which allowed Mendelssohn to strike a free-kick into the bottom-left corner of the goal to make it 6-0. Herbert then surged down the right and crossed selflessly for Tom Bonser who made no mistake from five-yards out.

Joe Turner, having a rare spell up front, then got himself on the scoresheet after powering his way through the heart of the visitors’ defence to thump the ball home.

Mendelssohn then completed his hat-trick and the Hurricanes scoring to make it 9-0 at full-time.

AFC HENLEY HOTSPURS U14 emerged 3-2 winners against FINCHAMPSTEAD FLYERS U14 in a top of the table clash at the YMCA ground.

The hosts started brightly with multiple attacks and consistent pressure in the Flyers half. Taro Finch scored the Hotspurs first goal with a powerful shot from the edge of the box after a well weighted pass from George Khairallah.

Khairallah added the second not long after, scoring a rebound at close range from a Max King shot.

The Flyers rallied and had several attacks resulting in a string of corners. They finally made the breakthrough, scoring towards the end of the first half from close range to make it 2-1.

They continued this momentum and started strongly in the second half with a sustained period of pressure on the Hotspurs goal, captain and goalkeeper Ben Palmer making several saves and commanding the defence from the back.

Freddie Piasecki was particularly solid at right back, dealing with numerous Flyers' attacks on the left wing.

The Hotspurs rode out the pressure and started to get more possession, using it to good effect after an attack from Jake Williams and Finch resulted in a powerful shot from the edge of the box from Tyler O’Brien to make it 3-1.

There was some drama late on when the Flyers earned a penalty with one minute to go which they scored. Palmer was unlucky to not save it after diving the right way.

AFC HENLEY HURRICANES U16 lost 6-3 to CAVERSHAM REBELS U16. The Hurricanes started the game brightly and took the lead when a Charlie Graham free-kick was spilled by the Caversham keeper and Danny McAllister scored from the rebound.

Caversham drew level midway through the first half when a well struck shot into the roof of the net left keeper James Preston no chance.

After the break, the Hurricanes started well. Luke Davies headed home after a Jackson Meredith free-kick had come back off the crossbar.

With 30 minutes left to play the result could have gone either way but it was Caversham who scored three quick goals to put them 6-2 ahead.

Casper Fearn pulled a goal back with a well struck left foot shot but it was just a consolation. Defender Jojo Barry was awarded man-of-the-match for Henley.