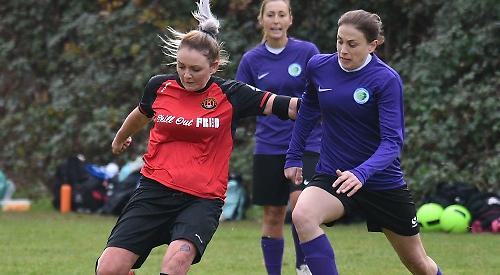 NATALIE RUMP set Henley on course to a valuable three points but they were pegged back twice to settle for a share of the spoils on resuming the Development
Division of the Thames Valley Counties Women’s League.

Hosts Henley started well and had all the play in the Shinfield half, forcing an early corner to be delivered by Georgia Hill.

Shinfield responded by making work for Henley captain Lou Colam in midfield, who battled in the air to head the ball clear from her area twice in quick succession.

An early shot on goal was saved by goalkeeper Anna West before another Henley corner delivered by Hill spawned an impressive run into the box by Hannah Palmer.

Shinfield pushed back but the ball was quickly intercepted by Rump, who dribbled the ball three-quarters of the length of the pitch to score.

Palmer then picked up the pace and dribbled the ball around the box, which brought a foul after her shirt was tugged, giving a free-kick just outside the penalty area. This was hastily taken by Hill and possession was lost to the Shinfield midfield, who exploited the gaps, and drove a shot across goal into the right corner to equalise.

Henley rung the changes in defence with Cassie Coleman and Chloe Rogers coming on to combat Shinfield’s pressure, which drew a great save from West and some last-ditch clearances. One of these, by left-back Claire Rilett, found the feet of Rump who passed to Palmer, who put Henley back in front.

Shinfield responded with attacks of their own but these were handled well by the Henley defence with help from Rump and Colam, with the latter then leaving the pitch injured and Bex Daley was moved to the centre of the pitch.

Jennifer Candillio combined with Hill on the right side with a series of clever passes and supplied a cross for Palmer but she could not convert. Shinfield countered with a quick attack and a shot on target but this was saved by West.

Chances for Palmer and Rump came again before the half-time whistle as Henley tried to pit the game to bed.

Both teams started the second half with zeal and Palmer used her pace on the right wing to good effect. Shinfield battled hard in the Henley area and after a missed clearance from the hosts the visitors equalised.

Play remained fairly equal with opportunities for both teams, notably another chance for Palmer going just wide, hitting the side netting.

Then Maria Porterro, who managed to get through the defence and one-on-one with the goalkeeper, failed to find her footing quickly enough to go two goals in front.

Shinfield too had a final chance to clinch it but right-back Rogers kept them at bay, earning her player of the match in the process.