Let's Get Down to Business: Matthew Hare, founder and chief executive of Zzoomm 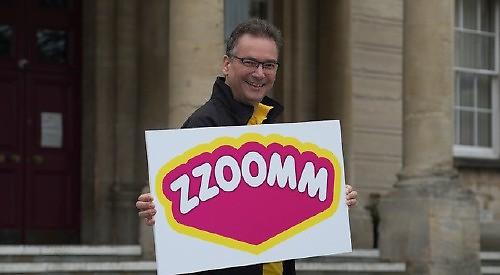 MATTHEW HARE is the founder and chief executive of Zzoomm, the company that has been installing full fibre high speed broadband in Henley. Born in Fleet, he went to school in Surrey before reading economics at Bristol University. He and his wife Emma, who teaches German, live in Stanton Harcourt with their two flat-coated retrievers. Apart from starting companies, Matthew loves attending live music festivals and concerts, opera, theatre and cinema.

We are a private communications business building and operating new full fibre networks designed to last for the next 50 years.

In 1984, I was one of the first employees of Racal Millicom, which launched Vodafone on January 1, 1985. I then went to America to try to start a new business. Nine months later I was back here, having run out of money. I then joined the Millicom group where I stayed for seven years, doing all sorts of things, including starting up the company that became Orange. In 1996, I started my own company, Community Internet. I bought and sold companies through the dot-com boom and bust and out the other side and through the 2008 crash. It was a heck of a ride. I sold the last bit of that business in 2010. Then I started a business called Gigaclear, which was a rural full fibre operator in Oxfordshire, Berkshire and other rural counties. The company was taken over by our biggest shareholder in 2018. The business was then valued at £270 million. I didn’t get all that but left the company and had to take six months’ “gardening leave”, which I didn’t enjoy as much as I might have done as I don’t really have a proper hobby. Then I started again with Zzoomm. Henley was an ideal choice to begin. Although a lot of people were complaining when we started digging up the streets, we now have a lot of very happy customers.

To build a brilliant business, doing something which I believe is really important to the UK and ultimately upgrading the infrastructure to give people the capability they don’t even know today that they will want tomorrow. In other words, a business that is important and can generate a good return for our investors.

I don’t really know as it’s much more challenging to set up a business than to run one for somebody else. I enjoy the challenge and I’m quite confident.

I’ve worked with a number of people who have helped me. For the last 15 years I’ve been a member of a chief executives club all trying to build fast-growing businesses, mostly in technology. This is really a mentoring group.

We’ve gone from having no customers a year ago to lots.

Having a clear goal and communicating that through the company means that you can end up making a lot of people very happy.

It’s all about people. Making sure we have the right people in the right jobs doing the right things.

Things have become more expensive and supplies have become more difficult to get. Meetings have been more problematical. Some people are reluctant to allow engineers into their home. On the upside there has been a huge increase in home working, which looks set to continue, so demand has been excellent.

The opportunity to build fibre in the UK is huge. We have a list of about 240 market towns similar to Henley and we’ll continue building.

Persistence. You rarely hit the right combination of business model, product and delivery plan in one go. You have to keep making adjustments and improvements.

Start a business about something you know. Get a job in a similar business so you get paid while you learn. It’s the things you don’t know that could kill you.

I’ve made loads of mistakes. Some I regret, but you can’t dwell on that for ever. Make the best decision you can when you make it and then move on. And sometimes you may have to say sorry to people.

I’m pretty good at prioritising and getting stuff done.

Hard work, self-awareness and being lucky.

Being in the right place at the right time and working hard.

That has changed with working from home much more. I used to wear a suit two or three days a week but now it’s probably once a month.

A challenge because that’s the fun of being in business.

Because I’m at my desk a lot I try not to have lunch there.