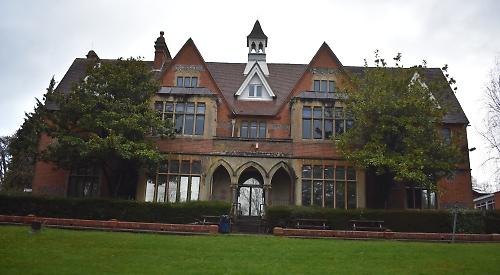 A SENIOR librarian at The Henley College created a gingerbread house depicting its Rotherfield building.

Karen Broadbent spent about 12 hours working on her creation, saying it was a “labour of love”.

It is about 16in wide and 1ft tall, not including the bell tower.

There are battery powered lights inside the house.

Karen, of Orchard Close, Sonning Common, said: “I make a gingerbread something every year. In the past I’ve done a standard house, which I used to do with my children when they were quite young.

The college building was formerly known as Rotherfield Court and was once the home of Henley Grammar School.

Karen said: “It’s such a beautiful building and I thought, ‘I’ll have a go at that’. It’s certainly the biggest one I’ve ever made.

“Working at the college, I have access to lots of photographs so I tried to find various pictures that showed different angles. I concentrated on the front of the building.

“I made a whole load of gingerbread, cut pieces out and tried putting it all together with varying degrees of success. The roof fell off a one point!

“I had to work out the windows first. I cut them out of the unbaked dough and then trimmed them when it came out of the oven.  I was then able to sand down the edges so it fitted together. I used 2lb of royal icing to stick it all together.

“It’s surprisingly light because it’s hollow inside. The heaviest thing is probably the battery pack.”

Karen used the icing to give the house a snow-covered appearance and included Christmas trees made from gingerbread and decorated the front of the building with icing.

It will take her and her husband Paul some time to eat it all.

Karen explained: “Unfortunately, we can’t go out and about this year and nobody can come to us, so it will be up to us to finish it off.

“We’ll probably break it up and put in a biscuit tin — we will be eating it through the spring!

“I sent pictures of it to my daughters. One of them was a student at the college and recognised it immediately and my other daughter was very impressed.

“She says I should go on Bake Off but I’m not very good at baking bread.”