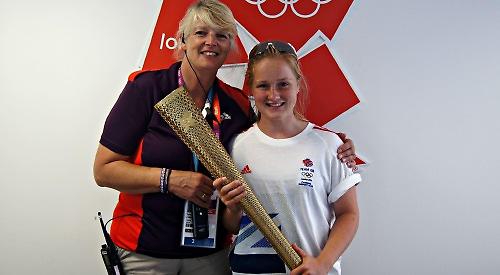 A GUIDE leader from Wargrave was made an MBE in the New Year’s Honours list.

Tamsin Phipps, 61, received the award for voluntary service to young people through GirlGuiding UK and to the country’s waterways.

She has lived in the village for 18 years and co-leads the guides and rangers alongside her daughter, Amber Owen.

The former army officer was public affairs manager for the British Canoe Union, now British Canoeing, the governing body for sport, for 10 years.

She has also chaired the Kennet & Avon Waterways Partnership for almost eight years.

Ms Phipps, of Victoria Road, said: “I am really honoured. To get recognised for what you do is fantastic but I don’t do the voluntary work to get recognised, I do it because it makes a difference to the community and I absolutely love being a part of the community.

“I think it is just natural within me — I have always volunteered for things, right back to when I was a guide myself and I could see the difference that volunteering makes.

“A bit of care and enthusiasm makes a huge difference to people’s lives and it is something that has kept me going.”

She is originally from Devon, one of five sisters, but grew up in Crowthorne. She studied for a degree in geography and special education needs at the University of Winchester as she wanted to teach.

After a short spell at a special needs school in Essex, she joined the army when she was 23. She spent six years as an officer in the Army Education Corps, with a particular interest in developing apprentices, and organised many of the sports teams.

Ms Phipps said: “I did enjoy the army and I enjoyed what it did for me. I wasn’t a frontline soldier. I was in education but if there had been any kind of conflict I would have been based in reception centres.

“The army is a great career and it is also about the camaraderie — you are never alone.

“By the time I left, I was much more confident. I am very glad I did it and I have made some very good friends from that experience.”

She left the army as she didn’t enjoy being posted to different places and wanted to be more involved in the community.

She bought a flat in Reading and joined Reading Canoe Club, which is based at The Warren in Caversham, and helped rebuild the clubhouse in 1998. She worked as head of training and development for John Mowlem, a construction company, in London.

She first became involved with guiding when her daughter joined the rainbows group at Palmer Park in Reading. She also returned to teaching at The Avenue, a special school in Tilehurst.

When she moved to Wargrave, her daughter joined the brownies unit but it was on the brink of closure.

Ms Phipps recalled: “The lady who ran it said she was planning to shut it, so I said, ‘Don’t worry, I’ll take it over’.

“The brownie pack grew quite a lot and then I realised there wasn’t a rainbow unit, so we launched that in Wargrave.

“My first rainbows then became brownies and it was lovely to see them grow up.

“At age 10, there was a group of them that wanted to become guides and there wasn’t a guide unit. They looked at me and I thought, ‘All right then, we’ll re-open the guides’ and I handed rainbows over to somebody else.”

When the girls reached 14, she started a rangers group for them.

Ms Phipps said: “Some of those girls left about 18 months ago having been with me for 13 years — I feel like a second mum to some of them.

“We also have young leaders, so girls come to us at 14 to help out. There are several girls, like my daughter, who come in really shy and they flourish.

“Being a guide leader is great because you see the children grow but you also bring out the child in you. I find myself going down zip wires, wading through mud and running across assault courses and it is just brilliant.

“I sit around the campfire having so much fun and we laugh so much it makes your sides ache.”

Her daughter is now 28 and works as a consultant for IBM as well as being her “right-hand person”.

Ms Phipps is also the joint division commissioner for the Maidenhead area.

When she was with the British Canoe Union, she ran the acclaimed Rivers Access campaign.

This was designed to promote greater access to the waterways and she took part in a paddle to Parliament in 2005 with a group of 70 people as part of the campaign.

She was also responsible for looking after VIP guests at the London Olympics in 2012.

In her role at the Kennet & Avon Waterways Partnership, she has continued to give young people greater access to water sports.