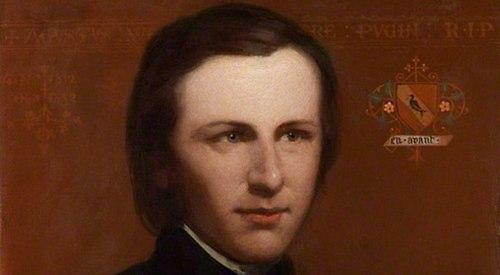 ON January 5, Megan Aldrich, adjunct professor of architectural and design history at Richmond, the American University, gave an informative and beautifully illustrated talk on Augustus Welby Pugin (1812-1852), the famous architect and designer.

The Pugins were a French family who settled in London away from the insecurity in their home country.

Augustus was trained by his architect fathe, who had his business in Great Russell Street.

He became strongly attracted to the rituals and traditions of the Catholic church, which formed the foundation for his design style, especially flat patterns and bold colouring. In many respects, he prefigured William Morris.

The Gothic Revival began in the middle of the 18th century, notably with the building of Strawberry Hill, which adopted design motifs from the old St Paul’s Cathedral and Westminster Abbey.

Pugin thought that essential architectural construction was primary and that only this should be given ornate enrichment rather than ornamentation for its own sake. He was an architect in his own right but his greatest contribution was in design.

Later in his career he worked with the architect Charles Barry to design the Palace of Westminster, Highclere Castle and other buildings.

Henley has its own examples of work by Pugin in Sacred Heart Church.

The next talk to the group will be via Zoom at 7.45pm on Tuesday, February 2 and will be given by Nicola Tallis, the historical writer who recently wrote a book on Margaret Beaufort.