So nICE to be back on skates 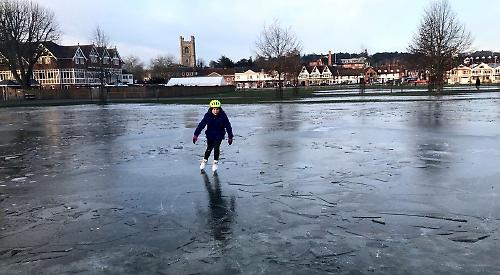 THIS is the moment that Amber Kriefman got on the ice for the first time in almost a year.

But this wasn’t a proper rink that the nine-year-old skater is used to but a temporary one caused by frozen floodwater.

The recent heavy rain flooded Lion Meadow in Henley, which is used by Henley Royal Regatta, and then the water turned to solid ice when temperatures plummeted last week.

Amber, from Peppard Common, would normally practice up to three times a week at Slough Ice Arena but the rink has been closed since the first coronavirus lockdown in March.

So she made the most of her opportunity when visiting Henley with her parents Ben and Louise and sister Freya, 11. The girls had come the previous day with their father hoping to buy — perhaps surprisingly — an ice cream.

They stopped at the Red Lion Lawn to watch the water gushing under Henley Bridge and looked over at the opposite riverbank and spotted the makeshift rink.

The following morning they returned and Amber brought her skates with her to perform on the ice while her family watched.

“It was an amazing feeling,” she said. “It was a bit nerve-wracking to start with because I was thinking I might fall over but once I got more confident it was fine.

“My sister checked the ice to see where the strongest parts were. I am missing skating. There’s not much else apart from home-schooling and at the weekends we just go for walks. It has been hard because you can’t really entertain yourself.

“I bought my skates last year and I probably only got to use them for two months before everything closed.”

Amber, who attends Peppard Primary School, spent about 40 minutes showing off her skills and had such a good time that the family returned the next day for an hour. Mr Kriefman, 44, who is an accountant for SAS, a software company in Medmenham, took pictures and filmed his daughter on the ice. He said: “It was really nice to see her doing something she enjoys so much after all this time — it has been so long.

“It is a great location and you could see the brewery and the rest of the town in the background, so it was a really nice moment.

“We had taken a walk the day before because there’s nothing else to do. I knew it was going to be cold that night so it would freeze a bit more and we went down the following morning.”

He added: “Last year when everything stopped, including ice skating, it was pretty disappointing and it was hard to break the news to Amber that the rink was shut.”

Mr Kriefman had another nice moment when he sent some of the photographs to his parents, Vivienne and Brian, who live in Henley.

He explained: “My mother told me that my grandad, Christopher Craddock, used to ice skate on the brewery fields, where the cricket pitch is. It was quite bizarre really.”

Amber’s first memory of skating is of visiting the John Nike Leisure Centre in Bracknell with her family when she was just four.

She did dancing and gymnastics for just over a year but became bored of them and when her parents asked what she would like to do instead, she said skating so they arranged for her to have lessons.

Amber said: “I enjoyed it but I found the first few lessons quite boring because you weren’t actually properly skating.

“Off the ice you practice how to get up if you’ve fallen over and on the ice you just learn how to keep your balance. Someone holds you and then you skate on your own as you get more confident.

“I started learning new moves while staying on two feet and it was after the first few lessons that I really started to enjoy it. I don’t think I will get bored of this.

“There are certain moves that determine how good you are. The catch foot is probably the most recent move I’ve learned.

“I can also do slaloms, a Russian drag, a spiral and an upright spin. The tea pot is a probably the hardest.” The centre in Bracknell closed last summer due to the financial strain of the pandemic but Amber had already moved over to Slough and is now a silver-level skater.

She said she also enjoyed riding her scooter and walking her dog, Oscar, a two-year-old schnauzer, but added: “I will be really excited and happy to get back to skating.”

Her father said: “It is a good interest for her to have and not many other people seem to do it.

“She really enjoys it and she is always smiling when she is out on the ice.

“Driving to Slough sometimes, when it is chucking it down with rain at 6pm after a full day at work, you’re not exactly counting your blessings, but when she gets on the ice it is always worth it because you can see how much it means.

“When the children are young, if there’s a sport they enjoy, I think you have to stick with it.”

Mr Kriefman, whose wife is a HR manager for General Electric, added: “We’ve both been very lucky and we’ve been able to keep our jobs without being on furlough. Like everyone else, we just get on with it and we are thankful to be able to carry on.

“It has been important for us to try to keep spirits up for the kids — that is one of the most tricky things. Louise and I get on with things like but trying to entertain and educate them at the same time is difficult.”