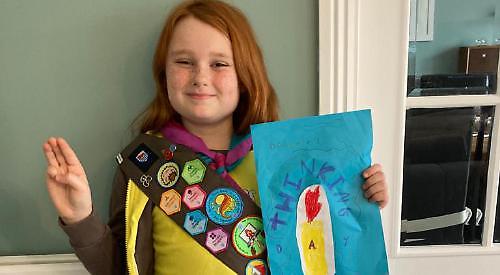 GIRLS from the 3rd Henley brownies made cakes and cards to celebrate World Thinking Day.

The annual event has been held across the world on February 22 every year since 1926.

This date was chosen because it was the birthday of scouting and guiding founder Robert Baden-Powell and his wife, Olave, world chief guide.

Members of the Henley group, who would normally meet at Harpsden hall every Friday, connected with another Zoom session to mark the occasion.

The event started with the girls making chocolate mug cakes, which they cooked in the microwave.

While waiting for these to cool, they were tasked with making Thinking Day cards. These could be dedicated to somebody also involved in Girlguiding, or someone they wished was a part of the organisation.

The meeting was overseen by leader Rachel Leverett and deputy leader Ellen Buttrick, who is a member of the GB para rowing team squad and currently training for Tokyo 2021.

Ms Buttrick, who lives in Albert Road, has been involved with the Henley group since she moved to the town from Leeds three years ago.

The 25-year-old been part of the organisation since the age of seven when she was a brownie and was recently been awarded her leadership qualification.

She said: “The girls are only seven to 10 years old and the whole idea is to empower young girls to come out of their shells and be adventurous.

“It was really good. We did the mug cakes to start with and they had a list of all the ingredients. We had one slight explosion, but it went really well apart from that.

“We told them they had to wait for them to cool down while they did the cards and we kept seeing them trying to take scoops out of their mugs.

“The cards were very creative. They had the Brownie promise or their favourite thing to do and then they took it in turns to explain their design.

“We then talked about the meaning behind World Thinking Day.”

The 10 girls in the group have been able to carry on earning badges by meeting online.

They were also able to return to face-to-face meetings in September by holding socially distanced gatherings in Harpsden prior to the second lockdown.

Ms Buttrick believes she and her Ms Leverett have done their best in difficult circumstances to give the girls something to look forward to every week.

She was part of the 2019 world championship winning crew in Austria.

She qualifies for the para squad due to a sight impairment called Stargardt disease, which was diagnosed in 2014. This is an inherited eye condition that affects the retina and causes a reduction in central detailed vision.

Ms Buttrick is optimistic the Games will go ahead after their cancellation last year and she is excited about her first Paralympics.

She said: “We are almost at the point in the season where last time it got cancelled. I thought it was the right decision and once we couldn’t train together it would have been concerning if they had tried to go ahead.

“I just put myself into helping with the Henley Covid-19 Mutual Aid Group and I’m an NHS volunteer as well, so I put all my energy into those two things.”

The 3rd Henley brownies are looking for more volunteers. If you are interested, register at girlguiding.
org.uk/get-involved/become
-a-volunteer