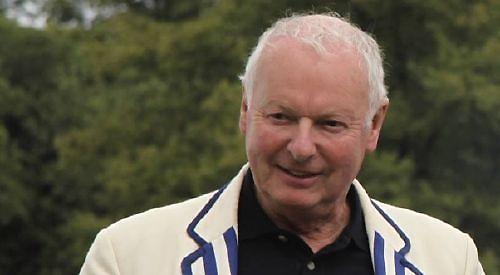 BILL ROSE, who died in February, leaves the legacy of his great collection of Thames boats and ephemera, which is to be housed in a repurposed boatyard in Henley.

Bill went to University College School in London, where he learnt to row on the Thames and the seed of a lifelong passion for boats was nurtured.

After training at the Royal Agricultural College in Cirencester, he farmed near Marlow for many years before joining the family ceramic and glassware business, taking over from his father as the chief buyer.

During his farming years, with plenty of available storage, Bill’s fascination with boats began to gather pace.

In 1965 he bought the steam launch Pierrette, built in 1894 by George Des Vignes in Chertsey — his transformation from farmer and businessman to collector had begun.

The year 1972 was pivotal for Bill when Messum’s boatyard at Bray held a dispersal sale. Here he met, and subsequently married, Penny Messum, from the great Messum boat building dynasty; there could not have been a better match, their enduring partnership, along with their son Myles, gave Bill the energy to develop the collection.

The acquisition approach was very personal and a contrast to the modern museum policy. Restored boats were kept ready for a pleasant day out on the river, the quality of the restoration work was exceptional and detailed research placed each boat in context.

Every new acquisition became an intense project with both Bill and Penny applying their expertise to uncover the history and significance of the item as well as the practical task of restoration.

The knowledge and understanding of the fast-disappearing Thames boating tradition brought new consultancy work to Bill’s door and his research was instrumental in saving two important Second World War vessels, MGB-81 and HSL-102, for the nation.

The 150th anniversary of Henley Royal Regatta exhibition at Stonor Park and Stewards’ Enclosure was curated by Bill to great acclaim.

In 1986 the London auctioneers Phillips recruited Bill to head up their new annual Traditional Rivercraft and Ephemera auction where his breadth of knowledge and style gave this event a unique identity.

The Rose Collection grew organically to include a vast range of objects associated with rowing and boating for pleasure on the Royal River.

Bill held near mythical status among the vintage boat community. He was generous with his knowledge and directly influenced the careers of many boat builders, engineers, signwriters and other craftsmen who contributed their skills to this remarkable collection.

Bill had an endearing, politically incorrect, sense of humour. He could not abide the constrictions of a committee. His objection to the popularization of museums was a familiar theme.

He enjoyed the company of makers, people with skill and dedication who recognised the detail and subtly of the handmade.

But most of all he loved Penny and Myles who joined him, without question, in his passion. He will be remembered, with deep affection, by all who came to know this extraordinary man.