Accountants taken over as founder retires 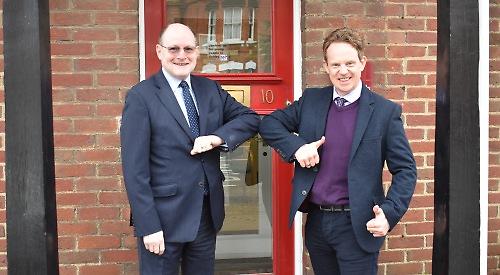 AN accountancy firm in Henley has been sold.

Chartered accountants Kench & Co, in Station Road, has been acquired by Ridgefield Consulting, an independent firm based in Oxford.

The acquisition happens as Eric Kench, managing director of the business, retires after almost 40 years.

Mr Kench, who lives in Caversham with his wife Kathy, said: “It’s a good move for the future of the firm.

“It will enable Kench & Co to continue to provide the same services and keep everyone here in Henley as a team.

“I’m retiring, so if Ridgefield hadn’t taken over what would be happening to the staff and to the clients? This is the best move to ensure everything continues as it is.”

Born and raised in the town, Mr Kench attended Henley Grammar School and Reading College, where he obtained a BTec in business studies. He set up the firm in May 1982 after managing another practice. He had hoped to become a partner of that company but when this did not happen, he decided to work for himself.

Mr Kench’s father introduced him to Colin Allum, an accountant whose practice, Scott Watson, was in Station Road.

He rented some space in his office and was able to do some work for him while at the same time begin to build his own business. Eventually, the two businesses merged.

Mr Kench said: “The firm has never been about me, it just happens to have my name on the door. It’s really about our people and I am happy that I’m leaving it in good hands.”

He said he was looking forward to spending more time in retirement travelling. One of this three sons lives in Brisbane.

Mr Kench also has a passion for flying and has a share in a Piper Arrow, which he flies from White Waltham airfield.

While at school he trained in the Air Training Corps and his ambition was to become an RAF pilot but he had to give it up because of a slight problem with his eyesight.

Mr Kench said: “As soon as we are allowed, I’ll be travelling to the south of France, where we have a home, and to Australia to see my son.

“I also like to fly so it will be good to have more time to do that as I retire.”

Simon Thomas, managing director of Ridgefield Consulting, said:  “We always keep an eye out for firms which share our values and the strong reputation that Eric Kench built in Henley made his business an obvious fit for us.

“It’s even better that we can expand the area we cover, so that we can serve more clients with our unique brand of partnership and expertise.”