Henley pays tribute to the Duke of Edinbugh 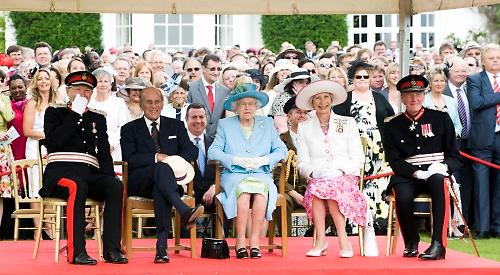 PEOPLE from the Henley area have spoken fondly of meeting the Duke of Edinburgh and how he made them laugh.

They joined the many tributes from statesmen and celebrities to ordinary people around the world for the Queen’s husband, who died at Windsor Castle on Friday, aged 99.

Prince Philip, the longest-serving consort in British history, had spent nearly a month in hospital where he underwent a heart procedure before returning home 24 days before his death.

His funeral will be held at St George’s Chapel in Windsor tomorrow (Saturday).

The televised service will be preceded by a ceremonial procession inside the grounds and a minute’s silence at 3pm.

Prince Philip’s most recent visit to Henley came in June 2012, when he accompanied the Queen for a tour of Henley Business School and a community tea party to mark her diamond jubilee.

They arrived by car at Hambleden Lock and then boarded Alaska, the oldest working passenger steam boat, to make the seven-minute journey to Greenlands.

Along the way, they were cheered by crowds of people, who lined the riverbank and waved flags.

It was something that the Queen made light of as she apologised to the then Mayor, Elizabeth Hodgkin, for making the town so busy.

Mrs Hodgkin, of Nicholas Road, Henley, recalled: “I was very lucky to be asked to meet and be presented to the Queen and the Duke. I had just returned from holiday, expecting to be part of the crowd, but came back to urgent messages from the Lord Lieutenant of Oxfordshire.

“Directly after the Queen had spoken to me, suddenly the Duke of Edinburgh was there.

“He shook my hand, lifted up my mayoral chain and said, ‘Hmm, nice badge’. I managed to hold in the laugh I so desperately wanted to let out and did a polite grin. I think many people will have similar stories.

“I feel sad that he has gone — it is the end of an era. We have grown up with him and the Queen in our lives, so we know that there will be change.

“There is great respect for the Duke and all he has done for the many organisations he has been involved with and the way he has supported the Queen and all the royal family.

“My husband Richard and I send our condolences to all the royal family.”

The royal couple attended a garden party with more than 4,000 guests in glorious sunshine. They were welcomed by the Lord Lieutenants of Oxfordshire, Berkshire and Buckinghamshire and presented with a 60kg cake in the shape of the three counties.

The Duke wore a navy suit and carried a straw hat, while the Queen wore a sky blue jacket and hat and a cream dress.

Charlotte Snowden, who covered the event as a photographer for the Henley Standard, said: “My fondest memory is of the Queen and the Duke of Edinburgh chatting to each other as she cut the cake. It was nice to be that close to them. They’re experts at putting people at ease and I watched them talk to Terry Wogan.

“I followed them for about two hours and it was one of the best days of my career. I’ve shot a lot of famous people but going around with them was special — I was one of only a few photographers chosen and it was brilliant to be able to take so many photos of them.”

The royals watched a river pageant called Time and the Thames, which was narrated by Sir Steve Redgrave and actors Jeremy Irons and Simon Williams, among others. It told the history of the river and featured a procession of 27 boats, including Royal Thames and Gloriana.

There was also a fly-past featuring two helicopters from RAF Benson and members of Henley’s Acorn Music Theatre Company performed on the lawns while dressed as animals.

Gail Rosier, artistic director for Acorn, recalled: “I was on a committee with Lucie Henwood and Caryn Moberly and we were invited to do a performance as the Queen and Prince Philip came down the river.

“We had a group of young people in a boat and as the Queen passed the riverbank we had people dressed as dragonflies, frogs and kingfishers performing.

“We were then presented to Prince Philip and the Queen at Henley Business School. The Queen was very nice and shook our hands and then the Duke of Edinburgh came by and he was amazing. He had such twinkly blue eyes and was full of energy.

“He said, ‘Were you part of the group that rowed the Thames for the pageant in London?’ and. of course, Lucie and Colin Henwood were part of that. He knew what he was talking about.

“He was full of beans, he was engaging and lovely. He lit us all up.

“The Queen and Prince Philip went all the way around the garden to meet our performers and spoke to all the young people involved.”

Among the other guests was Paul Barrett, chairman of trustees at the Chiltern Centre in Henley, who had the opportunity to shake hands with the Queen.

The charity, which looks after disabled young people, had just received the Queen’s Award for voluntary service.

Mr Barrett said: “We discussed the centre and she is a delightful person to meet.

“I’ve met her on several occasions but never had the chance to speak with Philip. We are very lucky to have her and everybody feels for her at this rather sad time. At age 99 you can’t be too surprised but it will always be upsetting when it happens.

“I would echo what the Duke of York said in that he was the grandfather to the nation in many ways.”

Mr Barrett had seen the Duke of Edinburgh in the flesh decades before when he opened the new pier at Deal in Kent in 1952, which had been rebuilt after the Second World War.

He said: “I was there because in those days not everybody had television. I was an eight-year-old boy and I was in awe of the whole thing.

“There were all these important-looking black cars and crowds of people around the pier. From what I remember, he cut a ribbon and entered the pier as the first official visitor.”

Twelve years after this, in April 1964, the Duke of Edinburgh made an informal visit to celebrate the centenary of Maharajah’s Well in Stoke Row.

He landed a helicopter on the village green and was welcomed by trustees of the well committee before walking through the crowds of people who had gathered for the occasion.

He was invited to take part in a ceremonial drawing of the water and mix it with water that had been specially flown from the River Ganges.

After being presented with an ivory cigar box, he visited the nearby cottage occupied by the well-keeper and the village church for a commemorative service. From there, he went to the cherry orchard adjoining the well and planted a tree before going to meet a group of about 70 people at the village hall.

The majority started to stand for the Prince, who insisted, “Sit down, please.”

He was then invited to the Cherry Tree Inn for lunch before getting back into his helicopter and departing for Newbury
Racecourse.

Award-winning artist Bill Mundy was asked to produce paintings of the Duke of Edinburgh on two occasions.

Mr Mundy, who has lived in Henley for 43 years, has been producing miniature portraits since the late Seventies.

But the first time he met Prince Philip was at a garden party in Bangkok in the late Sixties when he was working for his own Singapore-based advertising agency. His first commission was a painting of the Sultan of Johar.

It was in 1984 that he was first commissioned to paint a portrait of the Duke of Edinburgh by the Game & Wildlife Conservation Trust as he was a patron of the charity.

Mr Mundy recalled: “I thought it was going to be Charles but then the Palace rang me and told me it was the Duke of Edinburgh.” Prince Philip spent an hour sitting at Buckingham Palace as Mr Mundy produced a sketch and took photographs in order to help him with the painting.

“We were in a special room where portraits are done and the Queen has a different one,” said the artist.

“We had a long chat. He was a very nice man and had a great sense of humour. We talked about various things and he saw I had a camera with me.

“He told me that he had one similar when he had visited the Galapagos Islands but he dropped it in the water and ruined it.

“He was very interested in art because he painted himself.

“He was so nice and such an interesting man. After I finished, he showed me all the gifts that visiting presidents and sultans had given the royal family. It was a really wonderful experience.”

He said Prince Philip signed the painting, which was rare.

Mr Mundy was asked to paint another portrait three years ago and he presented it to him at a dinner in Windsor.

It depicts the Duke of Edinburgh in front of three stained glass windows, which he had designed himself. They were commissioned as part of the restoration of Windsor Castle following a fire in 1992. Mr Mundy said Prince Philip was among his most distinguished and cherished sitters.

He said: “He is very near the top. I’ve painted two Sultans and various other notable people.

“When the Queen came to Henley a few years ago to open the new Perpetual building, I was asked to paint a miniature picture of her favourite horse winning a race at Newbury and I presented it to her.

“I would say he was the most interesting person to talk to while I was capturing them.

“When I lived in Singapore, I used to go to the Sultan of Johar’s palace many times and he was also very interesting but Prince Philip was such a kind man and I was very privileged to paint his portrait. He also had a very good memory.”

In 2017, television presenter Phillip Schofield arrived late for the launch of the Chiltern Centre’s Friends scheme.

Schofield, who lives in Fawley, had been filming a documentary on the Duke of Edinburgh’s Award scheme at St James’ Palace.

He apologised to the crowd when he arrived, explaining that he had been interviewing Prince Philip, and added: “You can’t really say, ‘Will you hurry up, I’m going to be late’.”