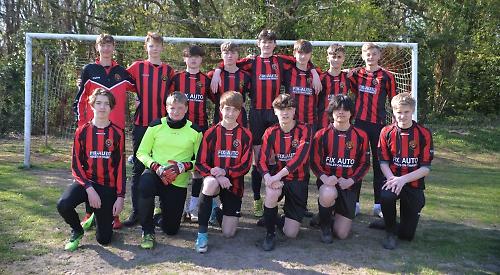 AFC HENLEY HURRICANES U16 lost out 1-0 against MOOR MEAD despite dominating much of the play on Saturday.

Against the run of play and with their first attack, Moor Mead took the lead when a ball forward fell to the striker who made no mistake from close range.

The chances kept coming for the Hurricanes but the strikers couldn’t convert their opportunities.

Going in at half-time a goal down, Henley’s heads could have dropped but to their credit they came out after the break full of intent. Despite dominating, clinical finishing was missing and the Hurricanes couldn’t find a deserved equaliser.

Every Hurricane player gave their all in a committed performance that saw the man-of-the-match award being jointly awarded to Jojo Barry and Luke Davies for an assured performance in the centre of defence.

Fin Flood scored one amd assisted another as AFC HENLEY HOTSPURS U16 played out an entertaining 2-2 draw at rivals CAVERSHAM TRENTS GOLDS on Saturday.

Despite the Trents playing in a higher division, the Hotspurs started the strongest and were soon in the lead following a corner.

Flood headed on a cross into the path of Benny Wood, who thumped the ball past the goalkeeper.

In the 34th minute the Hotspurs scored their second when Freddie Nicholson picked up a loose ball in the 18-yard-box and completed a cheeky backflick to Flood who chipped over the advancing goalkeeper. The Trents pushed hard in the second half and scored two goals in five minutes to make it 2-2.

Despite being under pressure, the Hotspurs defended well and nearly took the lead when Jack Carter shot from 20 yards, beating the goalkeeper, but the ball hit the underside of the cross bar and bounced into the keeper’s hands.

Five minutes later, Nicholson tried an audacious 35-yard shot direct from a free kick, which beat the goalkeeper but hit the crossbar.

The Trents finished the game the strongest but couldn’t break down the Hotspurs’ defence and the game ended all square.