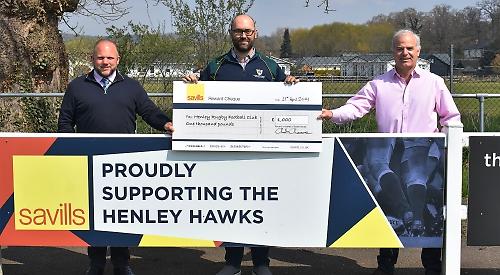 HENLEY Rugby Club has received a £5,000 donation from Savills.

The estate agent, which sponsors the club’s first team, the Hawks, has agreed to give £1,000 every time a member sells or lets a home through its office in Bell Street, Henley.

The latest contribution follows the sale of five properties at Badgemore Park, which is owned by rugby club member Jon Connell. Alistair Beynon, the club’s commercial manager, said: “Having had no rugby throughout the last season, we’ve relied on members’ and sponsors’ generosity to keep us going.

“A huge thank-you to Jon and Savills for this incredible donation. We are truly grateful and look forward to seeing them in September as we continue planning to start rugby again for the new season.” Mr Connell said: “I’m absolutely delighted to have been able to help Henley Rugby Club though such a challenging time.”

Charlie Chavasse, of Savills’s Henley office, said: “The club plays such an important role in the community and we’re thrilled to support its work.”