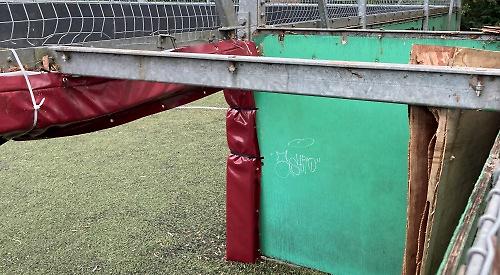 VANDALS have damaged property at Henley YMCA’s tiger turf pitch for the third time in just over a year.

The wooden boards behind one of the goals were broken to allow the culprits to get inside.

The same thing happened at the opposite goal in April last year and again in December.

Lisa Grant, general and financial manager at the YMCA in Lawson Road, said the damage was discovered by a resident.

She said the vandals must have climbed over the 9ft wire fence surrounding the pitch and jumped up and down on the boards to break them so they could get inside.

Ms Grant said: “Not only is this private property but it’s dangerous to break in and they were putting themselves at risk.”

The repairs will cost at least £1,000. Ms Grant said: “It’s just really sad and frustrating because this money will have to be diverted from other projects.

“These vandals could have come down to the office and asked us to use the pitch and would have paid as little as £1 per person.

“I think people forget that this is private property and some walk their dogs there and often leave their rubbish on the pitch. We don’t want confrontation and are happy for people to use the pitch but we’d ask them to take their rubbish away when they leave.”

Ms Grant said the trustees were now thinking about installing CCTV and new fences to prevent another incident but this could cost as much as £29,000.