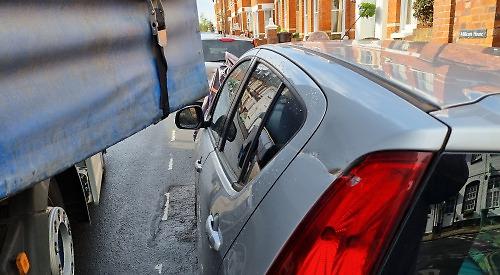 A HEAVY goods vehicle damaged a car after taking a wrong turn in Henley.

The driver of the Durham City Transport lorry turned from Friday Street into Queen Street, which is illegal for HGVs.

He struck a Vauxhall Agila on the passenger side near the back of the car, causing a dent and scratch.

The driver told witnesses of the incident on Wednesday morning that he had followed his sat nav device and missed a warning sign. Nigel Pike, who has lived in Friday Street for 23 years, said: “There is a quite small sign at the beginning of Friday Street and the driver said he didn’t see it.

“The same thing has happened many times before as cars are parked there illegally.

“This time there were no illegally parked cars but it was still difficult for the lorry to get through so when there are cars parked illegally on both sides of the road it makes it even more dangerous.”

This was the latest in a series of incidents involving lorries getting stuck at the same corner and will add more weight to the long-running campaign calling for a ban on HGVs travelling through Henley.

Oxfordshire County Council, the highways authority, has agreed to carry out studies into the effect of a 7.5-tonne weight restriction on Henley bridge.