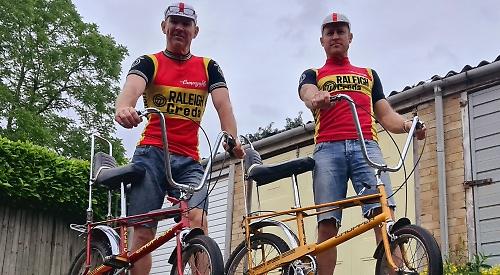 A BIKE ride in memory of a former cyclist raised more than £3,000 for charity.

The inaugural Graeme Taylor Ride took place last month and consisted of a 59km loop with 564m of elevation around the edge of the Chilterns starting and finishing at Henley Rugby Club.

The ride, which raised money for Sue Ryder, was organised by the GS Henley cycling club to pay tribute to Mr Taylor, a member of the club who died in January.

More than 150 people took part and among them were Matt Richardson and Bill Pollard, both from Henley, who rode original Seventies Raleigh Choppers, while wearing cut-off denim jeans, trainers and static-generating vintage nylon jerseys.

Mr Richardson, 55, a lawyer, said: “We set off quite early and we were overtaken by people on racing bikes a few times, but it was a really good experience. Our average speed was 22km per hour.

“The climb from Radnage to Chinnor Hill in particular was very difficult because the bikes we were using are not designed for that. But we made it all the way there without having to walk.

“We had a lot of people encouraging us because they saw us on these heavy and old bikes, — we had a lot of cheers, which was nice.

“The ride was very well organised and everyone was very sociable, there was an excellent atmosphere by the end of it — we shared lots of stories about Graeme, it was a really good way to remember him and to raise money for the charity.”