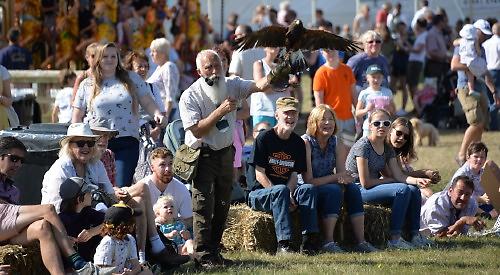 THE organisers of the Henley Farm & Country Show are set to make a surplus this year.

The association has fared well thanks to income from several sources, including the Government’s furlough scheme, sponsorship and subscription fees from members.

The Culden Faw estate, which owns the showground off Marlow Road and leases it out, also gave a year’s rent holiday in 2020.

The association’s total projected income was £61,250 while its outgoings, which are largely administrative, are likely to be £49,750. It also has reserves of more than more than £100,000.

At the meeting, which was held at the village hall in Hambleden on Monday night, it was confirmed this year’s show will go ahead as usual on September 11.

The association had pencilled in the date but wasn’t sure whether it would be able to proceed due to the coronavirus pandemic. Many of the exhibits will be displayed in the open air rather than under large marquees to reduce the risk of covid spreading.

There will not be a formal produce section because growers now don’t have enough notice to prepare their entries although a small number of loyal supporters including Tim Saint, of Playhatch, will exhibit their goods.

There will be an increase in the horse sections because other equestrian events have been cancelled this year. Retailers will have to bring their own gazebos.

Peter Webb, the association’s chairman, told members the show should make a surplus of £34,000 even if attendance were low. He said: “We are very fortunate that our finances are in a stable condition.

“We’re very pleased to be returning to normality but I can’t emphasise enough that this has not been a rash decision. It was made logically after considering all eventualities.”

Meanwhile, the association’s annual ploughing match will be taking place at Frizers Farm in Sonning Eye on October 3 and is expected to make a surplus of at least £3,000. Its sheepdog trial has been called off but will return in 2022.