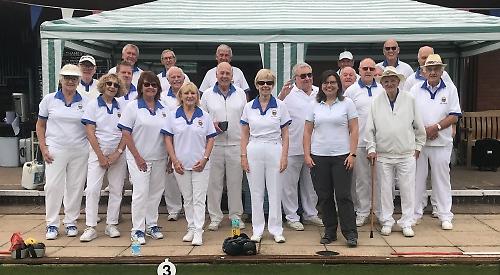 Nigel Bridges, skipping in his first match of the season, with Keith Lawrance and new bowler Martin Taylor, were many down, but picked up some to go down 12-23.

Kevin Browne with Maurice Robins, who had a good match, and John Wilkinson were evenly matched and two up after 10 ends, ahead by one after 16 ends, but dropped four to go down 15-18.

Peter Borsberry with Jim Walter and John Cross, struggled throughout going down 7-29. Richard Kingston, skipping for the first time this season, with Jim Turner, also a new member this season, and Brian Duddy went down heavily
5-28.

On Thursday last week, HENLEY tightened their grip on the top of the Oddfellows Triples League when they visited HURST, winning on four of the five rinks by 91-61, gaining 12 points to Hurst’s two.

Barrie Davies with Peter Borsberry and Jo Wilson were in complete control running out winners 22-7. Gill Robins with Colin Ward and Richard Kingston raced to a 12-shot lead after 12, then 15 ahead after 16. Then ended up dropping six but won 19-10.

Norman Daniells with Simon Hatcher and Angelika Crisa were 16-16 going into the last end, holding one with one ball remaining only for the Hurst skipper to pick up the jack and score three, so Henley went down 16-19.

Meanwhile, Henley staged the final of its Ladies’ 4 Wood Pairs earlier on the same day which featured Romy Painter and Joan Edwards against Lynn Sayer and Angie Isaac over 21 ends.

Painter and Edwards took the lead and built up a healthy margin over the first 12 ends. At that point, Sayer and Isaac started clawing shots back.

They continued to press but just ran out of ends with Painter and Edwards winning by three shots.

On Sunday, the club played one of its one-day competitions, the mixed triples. Twenty-four members competed in two pools of four teams, each in a round-robin tournament of three games each.