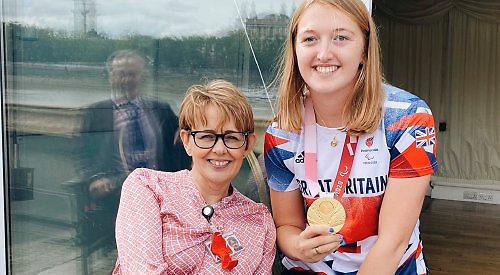 PARALYMPIC rowing champion Ellen Buttrick is having to carry her medal around in an old sock.

The 26-year-old, of Albert Road, Henley, was part of the mixed coxed four that won gold in Japan last month.

The crew received their medals after the final on the Sea Forest Waterway in Tokyo Bay but the cases weren’t ready and the athletes had to leave Japan quickly due to the covid safety rules.

Ellen revealed her sock alternative while showing off her medal at a meeting of the 3rd Henley brownies group, where she is deputy leader.

Twelve girls attended the meeting at Harpsden village hall and were thrilled when Ellen arrived wearing her Team GB uniform.

She said: “As I came in, they all started talking really loudly and they were really excited. Some of them are new so it was their first time seeing me.

“They started crowding around me and then we sat down and I told them about being in Tokyo.

“Some of the girls said they had already seen my race and I showed them my medal. I passed it around while they sat in a circle.

“They asked me about winning and I said you should always believe in yourself.”

Group leader Rachel Leverett said: “The brownies each got to hold the medal and look at the engravings on it. It is very eco-friendly and made from melted-down mobile phone parts.

“Ellen told them that the event name is around the rim and there is braille on the front.

“She told them a little about her adventure, that in the Olympic village there is a block of flats for each country and the canteen is open 24/7 and has food from all around the world.

“She told the girls that she had been training for nine years ahead of the Tokyo Paralympics.” Ellen was in the boat with fellow Henley residents James Fox and cox Erin Kennedy along with Oliver Stanhope and Giedre Rakauskaite.

In the final they beat the USA by 11 seconds but their hopes of setting a world record were dashed by the windy conditions.

Ellen qualifies for the boat because she has Stargardt disease, an inherited eye condition that affects the retina and causes a reduction in central detailed vision.

She is originally from Leeds, where she joined the brownies when she was seven and was inspired by her Brown Owl. “She pushed me to believe that I really could achieve anything that I set my mind to,” said Ellen.

She was also invited to Westminster for an event to celebrate Channel 4’s coverage of the Games and met MPs and former athletes, including retired wheelchair racing champion Tanni Grey-Thompson.

She has also been back to Leeds Rowing Club to visit her old coach David Saul and some junior rowers.

She said: “I wanted to show them that if you work hard, then they might be successful, even if it is difficult.

“I’ve understood that I might be a role model ever since I joined the team but that was just with rowing but now people are stopping me in public for photos and that feels different.

“I don’t know if it will last but there’s definitely a bit of Olympic fever at the moment.

“It’s nice to speak to random people now that the pandemic restrictions are over and it’s cool to see how the Games impacted people back home.”

Ellen, who is hoping to be selected for the next Paralympics in Paris in 2024, has now started studying for a master’s degree in gender policy and inequalities at the London School of Commerce.

She said: “It will be nice to have something else to think about other than rowing.”