We ran London Marathon... but not necessarily along streets of capital 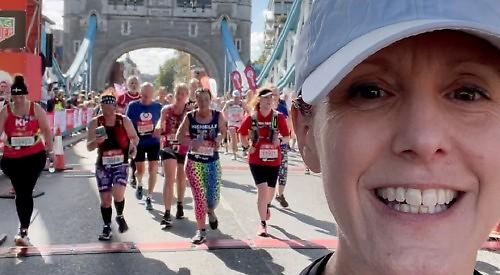 RUNNERS from the Henley area raised thousands of pounds for good causes by taking part in the London Marathon on Sunday.

Some were among the 40,000 people in the capital for the return of the live event, while others ran it virtually after devising their own 26.2-mile routes.

Last year’s marathon was called off due to the coronavirus pandemic.

After torrential rain on Saturday, many runners were concerned it would affect the race and their times but in the event the day turned out to be mild with sunshine and showers.

Firefighter Nick Middleton, 32, of Gainsborough Crescent, Henley, ran in his full uniform, including breathing apparatus, but still finished in a time of five hours and 19 minutes.

He was raising money for the Fire Fighters Charity, which provides physical and psychological support to past and present firefighters and their families.

Mr Middleton, who used to work at Henley fire station and is now based at Slough, said he was pleased with his time.

“It became really hard at about 17 miles,” he said. “The heat got really uncomfortable and my heart rate was going through the roof.

“We had a massive downpour and I think that saved me. I think everyone else was gutted when that happened but I was quite happy to cool down. I was overheating and needed to catch my breath so when the rain arrived I walked. I walked on and off for about two-and-a-half miles and then I ran the last bit.

“Every time I went to a water station, I got five bottles and poured the water over me, so I probably looked a mess by the time I finished.

“I was in one of the last waves and was with all the fancy dress people. There was a guy wearing a submarine suit and I managed to pip him at the line.”

He said: “It was so great being in an environment where everyone was running for their own personal cause and it was nice because of the doom and gloom of the last 18 months. Everyone being so happy was great and it brought out the best in humanity.”

He has raised almost £4,000 thanks to his colleagues, who ran on a treadmill in uniform and collected money to raise awareness of his run.

Hairdresser Kelly Hargreaves ran the marathon for the sixth time and achieved a new personal best time of four hours and 44 minutes.

The 55-year-old from Henley said: “I managed to knock 20 minutes off my personal best so I’m over the moon. It was amazing but I had worked really hard on my training.

“It was gruelling around the
22-mile mark when I got cramp in both my calf muscles. I just had to carry on because I knew that if I stopped or walked it would have made it 10 times worse.”

Mrs Hargreaves first ran the marathon in 2013 and on the last three occasions she has been raising money for MACS, a charity supporting children born with underdeveloped eyes or none at all. She raised £3,300 this year.

When the event was held remotely last year, she ran it with her husband Ian, 58, a landscape gardener, but he was unable to run this year due to injury.

Mrs Hargreaves, who overcame breast cancer for a second time last year, said that having the support of her daughter Millie, a personal trainer and nutritionist, had been a big help.

She added: “Lockdown was also a big bonus to me because I managed to run pretty much every day. I would like to thank everyone that has supported and sponsored me.”

Musician Anita Downing took part for the first time and finished in five hours and 16 minutes — despite suffering a heel injury. She was running for Sue Ryder in memory of her husband John, an award-winning press photographer who died in April last year, and raised £3,150.

Mrs Downing, a concert pianist who performs under her maiden name D’Attellis, took up running during the first coronavirus lockdown. Three months later, she ran a 10km to raise £1,300 for the charity.

She said: “I’m so relieved it’s over. My time was pretty dreadful because of my injury and the whole thing didn’t go according to plan.

“I was training on Friday and halfway through my right heel started giving me a bit of pain and that continued to grow.

“I didn’t know if I would be able to run and I stopped at a St John Ambulance station where they gave me some ice and paracetamol.

“I also managed to find my sister Julia and she gave me some ibuprofen. The buzz from the crowd was amazing. I was hobbling along and so many people asked if I was okay, it was really life-affirming.

“I wouldn’t have run if it wasn’t for the charity — I would have pulled out. I just couldn’t let them down, so quitting was never an option. I’m still in some pain now but I won’t run again until I know I’ve recovered.”

Mrs Downing said her husband, who had lung cancer, was treated with “dignity and compassion” by the Sue Ryder nurses in his final days.

She added: “They were so amazing and they were the real inspiration for me running the marathon.”

She was dressed as Tinkerbell as she was raising money for the Great Ormond Street Hospital Children’s Charity. Her son Ethan was born with a congenital heart defect and required lifesaving surgery at the London hospital when he was just six months old.

Now he is a healthy four-year-old and no longer needs medication but will probably need more surgery when he’s older.

Mrs Hamer, an education researcher, was supported by Ethan, her husband Alper, an engineer for Microsoft, and their daughter Rose.

She enjoyed the experience on Sunday but found running hard.

“The atmosphere after two years of lockdowns and not seeing people was just incredible,” she said. “I was just happy to finish. When we reached the Isle of Dogs just over halfway it got really windy. My wings didn’t like the air resistance and it was trying to blow me back.

“So many people were shouting, ‘Come on Tinkerbell’.

“The pain all the way down my legs was unbelievable. It was such a relief to get to the finish line and I had a little cry.”

The 59-year-old was running for Horatio’s Gardens, which
creates and maintains gardens at NHS spinal injury centres.

Mr Page, who has worked for Calnan Brothers in High Street, Watlington, for 40 years, last ran the marathon 10 years ago when he finished in four hours and 32 minutes.

He said: “This time, my time was half an hour slower but I’ve raised just shy of £5,000 so I’m really pleased. It’s mainly thanks to customers and friends as I made up some posters with all of the information about the charity.

“I’m glad I did it but it was really gruelling. At about 18 miles, I really started to feel it — I had been all right until then.

“The crowd was amazing. The noise was unbelievable and sometimes it almost got too much.”

Jo Bell, from Caversham, finished her own virtual marathon in seven hours and eight minutes. She started at the Mill at Sonning theatre, where she works in the box office, and ran along the Thames Path to Temple Lock before looping back.

Her favourite part of the route was going through the white deer park at Culham.

Mrs Bell, 54, was running in aid of NoToDogMeat, which supports efforts to save dogs and cats from the meat trade, and raised £70.

She said: “It was a flat route. The muddy part was going from Sonning to Shiplake on the towpath but I always find it muddy there. Apart from that, it was fine.

“It was hard work and I did have to motivate myself but there were a lot of other runners who were also doing it virtually, so we encouraged each other. It was also very rewarding doing it for charity.”

She was one of three people from a fitness group in Caversham called Raise the Bar who ran for Clear Sky and raised £2,000 between them.

Mrs Plackett started at Hambleden Lock and ran through Henley, Sonning and Caversham, then up The Warren before finishing back in Caversham in a total of four hours and 40 minutes.

She said: “I’d never done anything like this before and I was just so happy to finish. It was quite muddy off-road as I was following the river.”

Mrs Plackett said Becky Hill, who runs the fitness group and is a Clear Sky therapist, provided her with a training schedule and she went on lots of practice runs.

She added: “When you are doing it for a really good cause and lots of people have sponsored you, there is an expectation that you will finish.”

• People who ran the marathon virtually will receive a medal and T-shirt in the post.