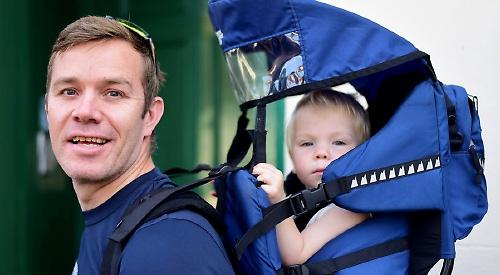 TWENTY people took part in a walk in aid of the charity that runs the Henley food bank.

Staff from Nomad were among those who took part in the 10km walk, which started and finished at its base at the d:two centre in Upper Market Place.

The walkers stopped at the Golden Ball pub in Lower Assendon at the halfway point of the afternoon event.

They were asked to seek sponsors or make a donation and raised a total of £500. Nomad, a youth and community project, is celebrating its 25th anniversary this year and hopes to raise £25,000 with a series of events.

Tim Prior, youth and families team manager, who was one of the walkers, said: “It was a very good event. We were pleased with the turnout and were blessed with the weather, which made for a fantastic afternoon.

“The primary focus isn’t necessarily to raise as much money as we can so to raise a little bit towards our 25-year target was a bonus.”

Mr Bruwer, who is married to double Olympic rowing silver medallist Debbie Flood, carried his 19-month-old daughter Rebekah on his back. He said: “It was a really lovely day. Everyone really enjoyed it and there were lots of nice conversations. I certainly felt it in my legs the next day and knew I’d had the extra 10kg on my back.”

It also runs the food bank and last year delivered nearly 3,000 bags of food to individuals and families in the Henley area.