Is this Disney-on-Thames for only wealthy retired? 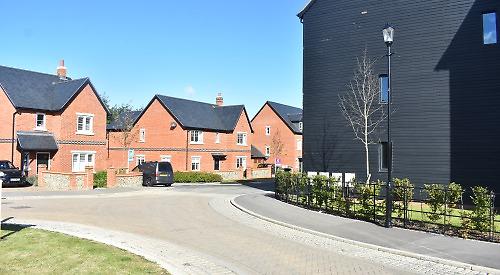 LAST week, we reported Henley developer Alan Pontin describing the town as being in danger of becoming a “Disneyesque retirement and tourist destination” without enough affordable housing for younger people. Reporter JACK HUDSON asked some other significant people if they agreed.

“I THINK we all like a mix of ages and it would be a shame if we drove youngsters away.

“But there are not many huge employers in Henley so it’s only natural that when young people are looking for work that it involves travel.

“We believe that Henley is being asked to provide more housing than is needed locally.

“I think the only way it’s achievable is if someone gifts a piece of land for affordable housing to be built on.

“What we find difficult to understand is when there was an exhibition in the town hall about the neighbourhood plan the age profile of the visitors was not young. Young people didn’t come and represent themselves.

“Oxford County Council, which was the planning authority, said 50 years ago that Henley had too many houses, so we’ve got big problems.

“Henley is a fantastic place to live because of all that goes on here but if we keep building houses then it won’t be desirable anymore.

“We need to sort out the traffic and parking problems and not make them worse. Walking and cycling schemes won’t work here because of the age of residents — we need parking.

“There are 26 villages where people might think of Henley as their shopping centre but they’ll go somewhere else if we don’t sort out our parking.

“During the pandemic and lockdown people began to appreciate their surroundings more and I think that has driven more people to join us in trying to keep Henley as a rural, beautiful town.

“We can’t go on building or we’ll become a concrete jungle and have Henley joining up with Harpsden and Shiplake.”

“IT’S really hard to get on the property ladder and there needs to be more opportunities for young people to do so.

“People who were born and raised here, like me and my partner, struggle to get housing.

“The YMCA is the only service we have providing housing for young people but that’s only up to the age of 35 and you can’t have a family there.

“Young people can’t afford the deposit to get on the housing ladder so are forced to rent privately where you’re paying double to triple what you’d be paying with a mortgage.

“It’s not the mortgage payments people find difficult, it’s that you need a lot of capital to begin with to get on the ladder.

“The first place we rented we lived in for eight years and we wanted to be close to the town centre.

“When we moved two years ago it was more about upsizing and having more space because our family had expanded.

“I get why Henley is expensive — all our schools are really good and you’ve got so many amazing community groups. You get what you pay for but we do need to do something to help young people.

“We all know we need to build more affordable housing but it’s not just about that, it’s about where we build them and all these other
considerations.

“Maybe Oxfordshire is underdeveloped but I don’t want building on the green areas. That should be a last resort.”

“MY thought when I saw Alan Pontin’s comments was what’s wrong with bringing active retirees into the town?

“A lot of groups, businesses and things that go on in Henley depend on retirees and people who have that amount of free time. We get a lot of interest from people who are downsizing and that helps open up the day-to-day market to younger buyers, or we get people who are moving to be close to their families.

“It’s natural that older people would want to live in Henley and there’s nothing wrong with that.

“But of course first-time buyers need affordable homes. There is a need for people who grew up in the town, as I did, to be able to live here.

“I bought my first house in Harpsden Road but now most first-time buyers would not be able to afford that.

“It’s a difficult issue but there are national quotas for affordable homes that developers have to meet. If they think there should be more affordable homes, they need to build them.

“You’re being exclusionary in another way if we only allow people from Henley to live here.

“If it is well-considered, there’s no reason why you shouldn’t expand a town by one field or something like that.

“The problem is everyone says we should build more affordable housing but then when it’s local to them, people keep challenging it.

“I don’t know how you solve that problem — you’ve got some very vociferous people who will object to any development.

“These say they want to help young people but if that green field that’s being developed is near them, they’ll object. It’s because of that that the whole planning process takes too long.”

“It’s a major problem that the cost of living is so high — it’s as high as London — and that’s something that puts off young people.

“The neighbourhood plan allows residents to decide what housing is needed and if we should build on green fields.

“That gives the people of Henley a say in the town’s future and it’s not for me to tell them what should be done. People have to decide for themselves.

“But we need more housing and we need to make sure that they are the right sort of homes for young people.”

“NO ONE who works for me lives in Henley. They live in places like Reading, Maidenhead and Wargrave.

“I think if they could live here they would but it’s just not even an option at the moment. One of my stylists used to rent in Henley but they were paying £1,200 a month, which you just can’t do.

“I live in Caversham; I’d love to live in Henley but my property would probably be worth £1 million if it was in Henley.

“I’ve had the salon for 38 years and I love Henley — it’s an amazing place with great people but it’s just too expensive.

“I can’t see the situation improving because if you did offer affordable housing everyone would jump on it.

“If I could get a nice property in Henley for half a million of course I’d want that, but so would everybody else.”

“I agree with Alan Pontin that Henley is at risk of becoming a ‘Disneyesque retirement and tourist location’.

“I completely disagree that the answer is to build on green fields.

“Mr Pontin seems to be assuming that adding more supply will help with the problem of affordability.

“Since 1996, the UK has been building more houses than we need but over the same period, house prices have risen 160 per cent.

“We need to build more homes for social rent and homes that are truly affordable for young people.

“The 40 per cent affordable housing being required for developments doesn’t help because 80 per cent of market value isn’t truly affordable.

“Thames Valley Police can’t get new police officers because none can afford to live here and we’ve got nurses living in unsuitable conditions because they can’t afford to live where they work.

“Piling thousands more houses on Henley would do nothing to resolve the crisis and would only result in the destruction of yet more of our precious countryside, yet more sewage being pumped into our rivers, more cars on our roads and more pressure on our already stretched GP surgeries.

“We have been doing this for years and it does not work — the link between more housing and affordability of housing is broken.

“We need to gently increase the density of housing in the town centre so people can live near where they work and walk to work.

“To attract and keep young people in Henley, we need to be building zero carbon housing for social rent and have proper controls on private sector rentals.

“When Mr Pontin talks about environmental standards, he should have a look at his own developments. Highlands Park is a sea of tarmac with not a solar panel in sight. Where are the electric vehicle charging points or the bike storage? There are no trees. Is that development zero carbon?

“The district council has been using money from section 106 payments to support and fund Henley Housing Trust in building some more social homes in Rotherfield Greys and it is working on plans to build its own social homes.”

“OF course Alan’s right in that we haven’t got enough affordable homes.

“If everyone gets older and older in the town there’s a lack of labour. You’ve got coffee shops, cafés and shops that are struggling to get workers. They’re fine in the summer but as soon as students go back to university there’s a shortage.

“All the people that work in the care homes come from Reading and that has a knock-on effect on the traffic we see in the town with people commuting.

“From 2010 to 2018, we only built 12 affordable homes. We didn’t build enough. There are many people you could blame for that but it’s mainly down to South Oxfordshire District Council.

“The truth is you will never have enough affordable housing. If you had a waiting list of 1,000 people and provided homes for them, another 600 will come along.

“Henley has already built out to its boundaries. The only thing we can now do is build on green spaces and then you’ll get environmentalists up in arms.

“Aecon did some research for us for the neighbourhood plan and said we should aim to provide 750 homes. But all the district council developments outside the town like those in Didcot should reduce the amount that we need in Henley.

“I’m trying to set up a community land trust, which will provide truly affordable homes for social rent. What you need to do this is for landowners to either gift a piece of land or sell it very cheaply.

“We’re hoping that an acre of land from Highlands Farm is going to be donated to us.

“This housing should be similar to the Henley and District Housing Trust homes in that they should never be sold, expect in exceptional circumstances.

“We used to have 1,000 council houses in the town but now we only have 680 because of those sold under Maggie Thatcher’s Right to Buy scheme.”