Remembrance poppy made from stones 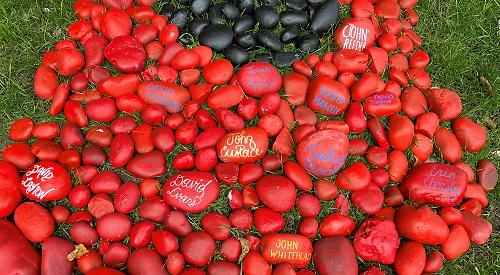 A GIANT remembrance poppy made of stones has been created in the grounds of Shiplake College.

The stones were painted red by year 7 and 8 pupils and some displaying the names of the fallen from the village.

Teacher Rebecca Goulden worked with the children on the project during their art club sessions.

She said: “We wanted to create something really poignant for remembrance this year. It was lovely to see the pride the pupils put into creating something so special.

“The artwork has been placed in a prominent position for all to see on the front drive.” The college will hold a remembrance service on Sunday with preacher Rev Hannah Bucks, padre to 4 Royal Logistics Corps, with pupils, parents and staff in attendance.

Elsewhere in the village, a service will be held at St Peter and St Paul’s Church at 10.50am and will be live-streamed on its YouTube channel. This will be followed by a remembrance service at the war memorial in Lower Shiplake at noon.

In Henley, a fly-past will be performed by RAF Benson at 10.46am, weather permitting. Then Mayor Sarah Miller, fellow town councillors and town clerk Sheridan Jacklin-Edward will gather on the town hall steps for a remembrance service led by Rev Jeremy Tayler, rector of Henley with Remenham.

There be will a reading by Anne Evans, chairman of the Henley and Peppard branch of the Royal British Legion, before the Last Post is sounded at 11am before a two-minute silence and then Reveille.

Mrs Evans will then read the Kohima Epitaph by John Maxwell Edmonds before prayers and the singing of Jerusalem.

Councillor Miller will address the congregation before readings by
Mr Jacklin-Edward and the Mayor’s cadet, Cpl Grace Iveson. Wreaths will then be laid by the Mayor, Lady Hall, deputy lieutenant of Oxfordshire, Councillor Stefan Gawrysiak on behalf of Oxfordshire County Council and representatives from South Oxfordshire District Council and the Royal British Legion followed by local organisations and members of the public.

After the service, participants will parade around Market Place before a reception in the Mayor’s parlour.

In Benson, a parade will take place at 10.30am, which will go along High Street to the war memorial led by the personnel from RAF Benson, members of the Royal British Legion, veterans, scouts, cubs, guides and brownies.

After the parade reaches the memorial, the names of servicemen from the parish who died in the world wars and those who died while serving at RAF Benson post-1945 will be read out.

The ceremony will includesthe sounding of the Last Post, a two-minute silence and  Reveille before poppy wreaths are laid.

Roads around the memorial will be closed to traffic during the service. There will not be a Remembrance service at St Helen’s Church.

At the churches of St Peter and St John in Caversham there will be a 9.30am service to remember those who have died in war. At St Margaret’s in Mapledurham, the service will begin at 10.50am, with a brief ceremony at the war memorial gates. There will not be a ceremony at the riverside war memorial this year.

A service will be held at St Peter’s and St Paul’s Church in Checkendon at 10.55am, conducted by Rev Canon Kevin Davies.

At St Barnabas’ Church in Emmer Green, there will be a service at 9.30am with an act of remembrance and then wreath- laying at the church’s war memorial, which is in the porch.

This will be followed by a communion service, which will be screened online.

In Kidmore End a service will be held at the war memorial in Wood Lane. People are asked to assemble at 10.50am. Afterwards there will be a continuation of the service at St John the Baptist Church.

In Nettlebed, residents are invited to join members of the village’s branch of the Royal British Legion at 10.30am in a walk from the village green to the village memorial at St Bartholomew’s Church, where there will be a short act of remembrance. This will be followed by the service in the church.

A service for residents of Peppard and Rotherfield Greys will be held at All Saints’ Church in Peppard from 10.50am following a reading of the roll of honour at the war memorial and two-minute silence.

A remembrance event will take place at the village hall in Sonning Common, which will be open from 10.45am to noon with a two-minute silence at 11am.

Falklands war veteran Alex Manning will then make a speech and a poppy wreath will be hung on the wall in memory of Francis Slough, Cyrus Thatcher and Barry Weston.

Tea and coffee will be available at the event and organisers are encouraging people to observe coronavirus safety guidelines.

In Stoke Row, prayers of remembrance will be said at St John the Evangelist Church from 9.30am.

In Wargrave, the usual remembrance parade will not be held but there will be a remembrance service at St Mary’s Church at 10am led by Rev John Cook.

Another service will follow at the war memorial on Mill Green at 10.45am.

There will be a two-minute silence, the laying of wreaths and the reading of the names on the memorial.

Social distancing is encouraged and there will be limited participation by village groups, such as the scouts and guides.

Sixty-nine poppy crosses will be planted to honour those villagers who have given their lives.

In Watlington, a parade and wreath-laying service will take place.

The participants, who will be accompanied by the Watlington Concert Band, will walk from the town hall to the memorial in High Street, starting at 10.45am.

In Woodcote there will be a service at 11.15am in St Leonard’s Church.