Town unites in remembrance for fallen 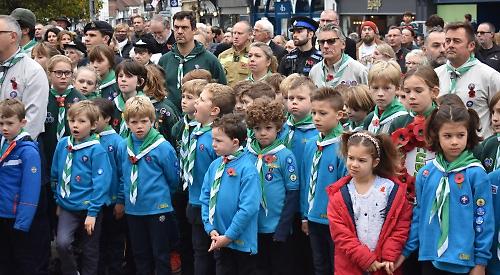 Henley must pass the baton of remembrance onto the next generation, according to Mayor Sarah Miller.

She was speaking at the service held outside Henley town hall to mark Remembrance Sunday, which was attended by more than 1,000 people.

Over 30 local groups and organisations laid wreaths on the town hall steps, including cadets, scouts, girl guides and police and fire services.

The service was led by rector of Henley Jeremy Taylor and there were readings by Anne Evans, Chairman of the Henley and Peppard branch of the Royal British Legion, town clerk Sheridan Jacklin-Edward and the Mayor’s cadet Grace Iveson.

Sea, army and air force cadets, scouts and guides paraded into Market Place and stood to attention outside the town hall during the service.

Cllr Miller told the crowd: “Thank you to those who have brought children and grandchildren here today, it is important that they share in this act of remembrance, the baton is being passed down.

“As a parent myself I see the importance of the next generation continuing to support the work of the Royal British Legion and all that they do.

“Thank you to the young people from local youth organisations in Henley, for you all represent our future. A future of peace, tolerance and inclusion.”

A planned fly-past by RAF Benson did not take place.

For the full report, see next week’s Henley Standard.