Hawks will have to be at best for Rochford clash 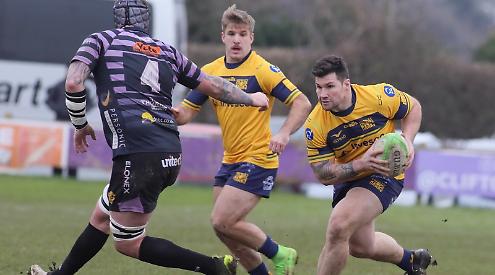 AFTER a break last week Henley Hawks are back in action on Saturday when they welcome Essex side, Rochford Hundred RFC to Dry Leas for their latest National 2 (South) fixture.

Kick-off is at 3pm. This will be Rochford’s first visit to Dry Leas. The two-week break will have given the Hawks a chance to recover from their heavy defeat at Worthing and plan for the remainder of the season.

The Hawks only have six fixtures left but they do not have any of the top four sides still to play.

With home games against Rochford, Barnstaple and Barnes, and away trips to Dings Crusaders, Leicester Lions and Old Albanian, head coach Luke Allen’s side have the opportunity to finish the season strongly.

Henley are still in fifth place in the league table on 77 points, some 14 points behind fourth- placed Clifton and now only seven ahead of Leicester Lions.

Rochford Hundred RFC were promoted to National League 2 (South) when they won the London and South-East Premier Division in the 2019-20 season.

They are currently 14th in the table and have won five of
their 23 matches but are 20 points ahead of 15th-placed Westcliff.

Although everything points to a Hawks win, Rochford have recorded wins against Canterbury, Dings Crusaders and Old Albanian and a few of their matches have been close affairs, so the Hawks will have to be at their best.

Earlier in the season, the Hawks won at Rochford 37-15 and in their last game, the Essex side lost 46-7 at home to Barnes.

For the Rochford game, head coach Luke Allen has made seven changes, one of those positional from the side that played at Worthing.

Brad Cook returns to the front row, while Marcus Lowe and Will Bordill have their chance in the back row with Sam Lunnon and Tom Hall taking their turn on the bench.

Matt Dalrymple comes in at outside half and Terence Barbarinsa returns to the centre.

Reuben Norville, who played in the centre at Worthing moves back to the wing and Cail Cookland returns to fullback in place of Will Panday who provides bench cover.

A number of other Henley teams are in action this weekend: Henley Vikings (3rd XV) also have a local derby, playing their latest league match in Sonning against Rams 4ths. Kick-off is at 2.30pm.

On Sunday, Henley Hawks Women have their final league game at home to Richmond. Kick-off is at 2pm.

On Wednesday, the Henley Vultures take on Wheatley Vets in the Oxfordshire Vets Cup.