Artist who brightened up the daily commute 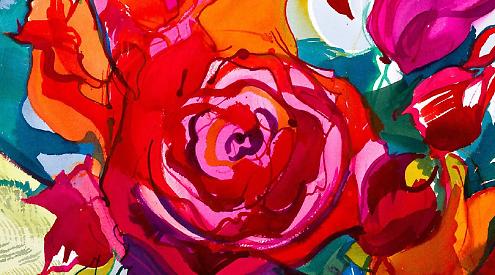 AN artist whose work may have an air of familiarity about it, particularly for commuters using the Underground, will be making a trip to her exhibition at the Old Fire Station Gallery in Henley, all the way from her Scottish home.

Jennie Tuffs is famed for her paintings of flowers in liquid acrylic, popping with colour, which were featured in posters commissioned by London Underground throughout the Eighties and Nineties, including the 1987 poster “The new Kew by Tube”, celebrating the opening of the Princess of Wales Conservatory at Kew Gardens.

Jennie’s exhibition, “Precarious Harmonies”, will premier some of her new paintings and collage works which show her ability to work with exuberant colours to capture the movement inherent in natural forms.

Jennie says: “Alongside my paintings, about half the exhibition will be collage works. They still retain my exuberant use of colour and the exploration of space, but quite different really.

“I tend to describe my work as a dynamic balance between representation and abstraction and my use of colour is very, very committed. And they’re large.”

In fact, says Jennie, her pictures appear and re-appear quite often in the most unexpected places.

She says: “This does mean that people have seen your work, they just don’t realise it, and that’s nice, so they can identify you.

“Often I’m speaking to people, especially in America, who suddenly go quiet on the phone and I’ll think, ‘Hello, I must be being boring’, and they’ve said, ‘I’m sitting in my kitchen in front of one of your posters, I’ve had it for years’, so it’s very gratifying in that way.

“I was once on the Tube in London, sitting on a bench with my own work behind me, and, you know, you get chatting to people. A woman next to me said, ‘What do you do?’ and I said, ‘That’, and she moved away – she thought I was some nutter! It was very funny.”

Originally from London, Jennie lives with her husband in rural Scotland, near Edinburgh, and has two sons, who both live in North America with their families. She trained at Saint Martin’s School of Art and Goldsmiths College in London in the Sixties and at the Accademia di Belle Arti in Florence.

Jennie is looking forward to showing in Henley again. She says: “My husband and I will be there in the gallery throughout the exhibition.” She sold well at her successful one-person shows at the Century Galleries run by Michael Shemilt, art dealer and owner.

She says: “It was a large airy gallery on Thames Side and a lot spun off from my shows there. I’ve shown all over the country, and it’s nice to be back.”

Jennie also had a solo show at Old Luxters Vineyard in Hambleden and says: “I have fond memories of the area.”

In 2016, Jennie created the artwork for a poster for the Great Broad Walk Borders at Kew Gardens when it was replanted.

Jennie says: “There’s a pedestrian tunnel between South Kensington Station and the Natural History Museum and there they displayed the image from the poster; it must have been about 20ft wide by 9ft tall — it was quite amazing.”

A year later in 2017, London Transport Museum’s exhibition ‘Poster Girls’ featured artworks by women artists commissioned by London Underground from the Twenties to the present day.

She says: “I was delighted to be selected as the featured artist for the Eighties and Nineties. As well as my posters they wanted contemporary work that wasn’t directly related to them. At the time I was making garments with collage work on them including full-length dramatic cloaks. They built an armature and a perspex case which showed it in three dimensions, which was wonderful — so it was rather spectacular when you saw it. That strengthened the idea of collage and that it has been in my head, along with liquid acrylic painting, for some time. It was nice to be reminded of work from the Seventies and now, at Henley, you will see collages of the present.”

While she has been painting in liquid acrylics for years, Jennie always wanted to incorporate more collage work and the lockdown brought about by the coronavirus pandemic presented the opportunity — time to develop new approaches.

Jenny says: “During covid, from my point of view, it was marvellous to be able to focus unashamedly on work and I did so for two years. I have a prodigious amount of work. I’ve got these two strings to my bow now.

“Usually you say, ‘Well, tomorrow I will’, and you don’t, but I was able to develop. Although I work every day anyway, I think that when you have your day-to-day life narrowed, as we all did in covid, you can actually free up to explore things in more detail. Well, it’s odd, but it’s a wonderful topic of conversation. We no longer talk about the weather, we talk about coronavirus.”

• Meet the artist, “Precarious Harmonies”, an exhibition of artworks by Jennie Tuffs, is at the Old Fire Station Gallery, Upper Market Place, Henley, from Thursday, August 4 to Tuesday, August 9, open from 10.30pm to 4.30pm daily or by arrangement. All work at the exhibition is for sale. For more information, visit www.jennietuffs.com