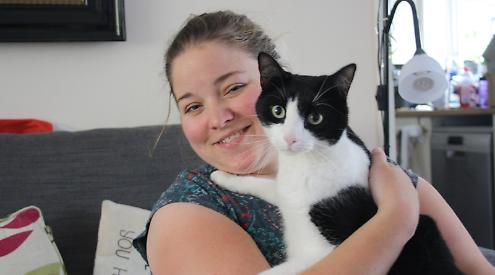 CAT owners in Henley say their pets are mysteriously going missing for days at a time.

At least three women on the Abrahams estate have had their cats vanish and then return when they posted about the disappearance on Facebook.

One believes this is nothing out of the ordinary but others claim the multiple disappearances are too much of a coincidence and the cats could be being taken deliberately.

Damaris San-Juliano, of Abrahams Road, noticed one of her two cats was missing on July 5 after letting her out the night before.

Ms San-Juliano, who lives with her daughters Leoni, 15, Amberleigh, 12, and Sophia, seven, and cats Winnie and Lilo, said: “The children had gone away with their dad. Winnie went out normally, same as she does every evening.

“In the morning I came down to let her in. I’ll normally open the door to go and feed the rabbits and she runs in but she wasn’t there.”

She adopted Winnie, who was a stray, in 2019. The fluffy, long-haired black and white cat helps Leoni, who suffers from anxiety.

“Winnie isn’t overly friendly, but she loves Leoni,” said Ms San-Juliano. “She will lie with her and go to her if she is in distress.

“Leoni has a difficulty expressing her emotions with humans but with Winnie she knows she can hug her. They play together and she laughs because Winnie’s so lazy she can’t be bothered to do anything but move her paw. She’s like a best friend really. Leoni feels a unique bond with her.”

Ms San-Juliano became concerned when the cat had not returned by that evening.

She said: “After she had been gone for 24 hours, I started to panic. By the next day, I thought, ‘I have to do a Facebook post’ as this was so out of character.

“Within an hour of posting, she came running into the house. I was really embarrassed as I felt I had wasted everyone’s time.”

Ms San-Juliano kept Winnie inside for a few days but when she did let her out again the cat vanished for another four days.

She said: “I started to panic again but I couldn’t post again as I’d look like an idiot.

“Leoni couldn’t face the idea of Winnie being missing.”

Ms San-Juliano then did post on Facebook, saying she was concerned about Winnie due to the heatwave and within an hour, the cat reappeared.

“I thought that unless Winnie is on Facebook, that was a bit of a coincidence,” she said.

“She came in and this time was really thin. She ran straight upstairs and ate and ate and she’s not normally food-led. She wanted to go out that night but I chose not to let her but after a couple of days, I thought it was unfair and did let her out.”

Winnie then vanished a third time. Ms San-Juliano said: “I felt there was something wrong.

“I drove around the streets, calling her and looking up people’s drives.

“I didn’t want to panic Leoni but I could see she was really upset. She wasn’t sleeping and couldn’t eat but she couldn’t verbalise it. I posted again on Facebook, but she didn’t return.”

Henley Deputy Mayor Donna Crook, who is a neighbour, then helped out.

She said: “I had covid at the time so was just sitting on the sofa. I told her to have a little walk because I thought I’d seen the cat at the top of Cooper Road.

“I’m a passionate cat owner. If my cat went missing, I’d hope someone would help me find it and that’s what I wanted to do here. I suggested someone could be innocently feeding her cat and wasn’t aware of the distress it was causing.

“I experienced that about 20 years ago when I lived in Mount View. This old lady was feeding all the cats salmon and my cats just wouldn’t come home.”

A few days later, Ms San-
Juliano and Leoni stuck flyers round the area with help from friends and family.

She said: “We went all around the neighbourhood posting them through doors and putting them on lamp posts.

“We came home and it had suddenly become real as Leoni said, ‘How am I going to live without her? I can’t face it’.”

A little later, she heard her gate rattle and Winnie bolted into the house. Ms San-Juliano said: “I ran upstairs and gave her a can of tuna. She looked terrible. Her tail used to be huge and bushy but it was almost bare.

“She had always looked so lustrous and had a lovely shiny coat. She came in that day looking dirty and dull and thin with clumps of hair missing.

“She was terrified, hiding in the corner and looking around all panicked.”

Now Winnie wears a tracker when she goes out at night.

Ms San-Juliano said: “Three times is too much of a coincidence, especially now that there are others who say their cats have gone missing. There are just too many coincidences for it not to be something sinister.

“I now am permanently in a state of panic because we got Winnie as something for Leoni to attach to and feel comfortable with.

“Winnie could die, she could get by a car or get ill, and we’d deal with that, but to think your cat is being kept against her will is horrible.”

Helen Dodwell, who lives in neighbouring Luker Avenue, said her cat Pluto had been disappearing in a similar way to Winnie for the past two years.

Mrs Dodwell, who has four other cats, said: “The first time, he was gone for a week. I was worried at the time but I tried not to show the kids I was.

“I posted on Facebook to ask if anyone had seen him. Then he just comes running back in one day. That is how it has been for a couple of years.

“When he comes in he wolfs so much food down. I don’t know if he’s going somewhere else. It concerns me as he’s my little pet.

“I don’t know if it’s anything sinister. It could be. He might have just found a nice den. It just seems a bit interesting that loads of cats round here have gone missing.”

Leanne Maddocks moved to Luker Avenue in May with her daughter Millie, 19, and cats Star and Winks.

Ms Maddocks, 48, said: “It was totally out of character for her. She would never normally go away for more than a few hours.

“I posted on Facebook that she had gone missing and after four days she returned. She was really timid and hid everywhere.

“She has always been a little shy and I figured it just had to be her getting used to the area. Even so, I kept her in for a few days after she returned.”

Ms Maddocks next let the cat out on July 11 and didn’t see her again for a week.

She said: “When Star returned, she was again really shy. Now she doesn’t leave anymore. She and Winks just stay in the garden.

“I don’t think it is anything suspicious. I expect it is probably just a result of moving house. You can’t stop cats unfortunately.”