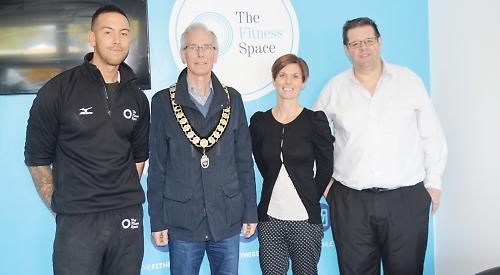 A NEW gym has opened in Henley, writes Rebecca Gilroy.

The Fitness Space at Century Business Park, off Station Road, was officially unveiled by Henley Mayor Julian Brookes on Monday.

It is run by Steve Little, 55, from Peppard, who decided to open the gym following the closure of LA Fitness in Newtown Road in August last year.

He said: “A lot of people who have signed up said they used to be members of LA Fitness and have done nothing since. I hope the business is here forever — I don’t plan on moving.”

The premises had been empty since October last year when catering and event hire company Place left after its lease expired.

Mr Little said he had invested £450,000 in the venture with more than half of that going on equipment including weights and cardiovascular apparatus.

The gym also has an app that allows members to look up exercise routines and chart how well they are doing.

Manager Ben Stokes, 28, of King’s Road, Henley, said: “We don’t want people to come and just use the gym.

“All members are assigned a coach from the start and every month we review aspects of their programme.”

Councillor Brookes said: “You can see there has been very significant investment here. This equipment is not cheap.”

The gym already has 110 members. Monthly and annual membership is available.