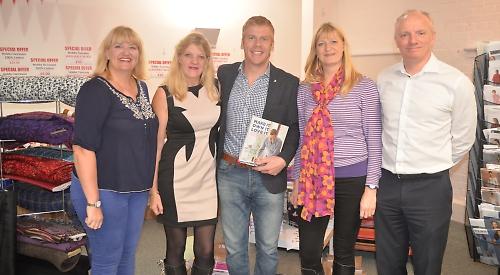 Matt Chapple, from Upper Basildon, was taking part in Sew Saturday, a national campaign to celebrate sewing, fabric and craft shops. He signed copies of his new book, Make It, Own It, Love It, chatted to fans and posed for pictures.

Mr Chapple, who won the third series of the BBC show last year, said: “It’s all about supporting the high street and local haberdasheries. Henley is not too far from me and these guys were happy to support me. I love going out to talking to people about crafting and sewing.”

Judy Edwards, manager of the shop, said: “Matt was brilliant. A lot of people turned out to meet him and he told everyone about his experiences being on television. People were saying he was a nice person. We sold all the copies of his book. People were buying it as a Christmas present.” Left to right, Vanessa Tomlin, Judy Edwards, Matt Chapple, Sarah Blundell, Jon Blundell