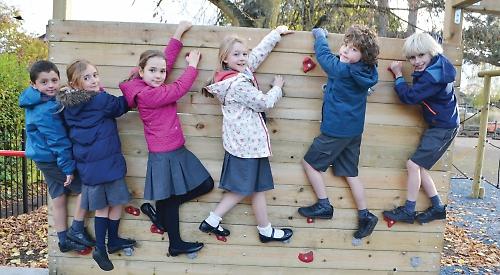 NEW play equipment costing £22,500 has been installed at Trinity Primary School in Henley.

The wooden climbing frames and ropes were officially opened by headteacher Helen Jones on Monday with three cheers from the children.

The equipment was paid for thanks to the fund-raising efforts of the Friends of Trinity School and sponsorship from estate agents Davis Tate.

Mrs Jones said: “What the Friends have done again, without a shadow of a doubt, is improve our site. Apart from the fact that the equipment looks gorgeous, it’s really important for the children’s activities at lunchtime.

“We like to have good climbing frames for exercise and their health. They love the rope climb.

“It’s an absolute pleasure to open it and to say ‘thank you’.”

The equipment, which was installed by ESP Play, of Burnley, includes monkey bars, climbing tyres and low level nets that the children can climb across as well as a blue, soft rubber floor that is supposed to mimic the River Thames.

Joseph Nicholson, chairman of the Friends, said the money took about a year to raise with events including a black tie ball at Henley town hall, which raised about £10,000, a glow-in-the-dark disco and a parent-teacher quiz.

“It’s fantastic to see the improvement in the children’s facilities,” he said. “They have got a new space to play in and some great play equipment. We wanted wooden frames, rather than metal, to tie in with the trees and wanted something to challenge the children from a physical perspective.”

Jo Walmsley, former chairwoman of the Friends, said: “We wanted something that was accessible for all ages.”

School governor Paul Haines said the new pieces brightened up the area. He added: “The longer term aim is to tidy up this area because it’s a good advert for the school.”

Jason Applebey, the manager of Davis Tate’s Henley branch, said: “We want very much to be involved in the local community.

“This is a worthwhile cause and the new equipment looks fantastic. I’m really pleased.”