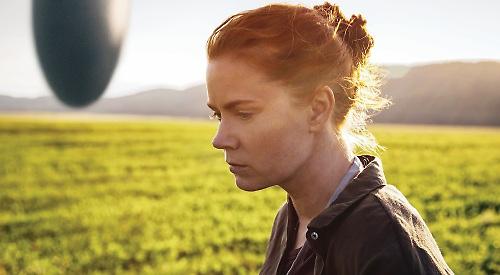 PERHAPS it’s been a while since a film has truly challenged me, but Denis Villeneuve’s Arrival had me scratching my head.

To say this is a high concept work dealing with life’s big questions is an understatement.

The director touches upon everything from space, time, relationships, the fleetingness of life and our place in the universe as a whole.

Those therefore hoping to enjoy a repeat of the well-trodden narrative of aliens land on Earth, humans meet unannounced visitors and inter-galactic war ensues need not apply.

Amy Adams plays linguist Dr Louise Banks who is part of a team sent to investigate one of 12 mysterious spacecraft that have arrived on Earth.

She is given the task of forging communication with the extraterrestrial guests. But all is not as it seems and it transpires that Dr Banks has some serious baggage in tow. The first half of the film is in stark contrast to the second as tension around the globe builds and the plot follows a more formulaic course, focusing on paranoia and fear of what we cannot comprehend.

The second, though, or final third, takes an entirely different direction. Here Villeneuve employs scientific phenomena such as temporal loops and plays with space and time at will.

Part of me thinks this is a film that — like Inception or Memento, which share several similar themes — will be best enjoyed, and indeed understood, with a second or even third viewing. Another thinks it is simply trying to be too clever for its own good and audiences will leave thinking they have just sat through two hours of pretentious tosh.

I take issue with Adams and her co-star Jeremy Renner, both Oscar nominees, here as well. While the performances are not bad, they are suitably “vanilla” and you feel the pair could readily have been exchanged for another two star performers at a moment’s notice.

What is certain, though, is that Arrival will have viewers discussing the film long after they have left the cinema.