Wealthier pensioners urged to give up fuel allowance for needy 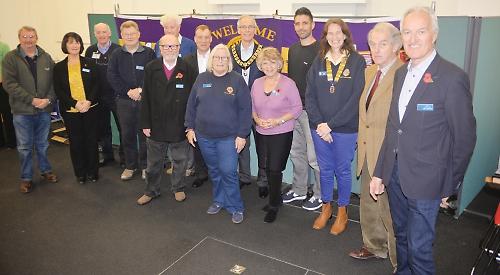 Henley Lions Club has launched a campaign which it hopes will raise thousands of pounds to help local people who are struggling to pay their energy bills.

It is working in conjunction with Henley Citizens Advice, which helps people in debt, and the Nomad youth and community project, which helps families in need.

The Lions say there are some people who don’t need the money and are asking them to give it to those who do.

The campaign is being led by Ian Tritton, from Peppard, who is a member of Henley Lions Club and has spoken to other Lions clubs that have run similar initiatives.

He said: “The payment often raises discussions around the dinner table, in pubs and at parties about whether it is right to accept it. It is not means-tested and not everyone feels they should get it.

“We want some or all of it to go to a family in hardship or fuel debt to help them keep warm in the winter. It’s an opportunity to set up a fund for the community to help with fuel debt.

“In our discussions with Nomad and Citizens Advice we know there are people who are struggling to pay and that more people will come forward.

“We have worked with them both over the years to help deliver relief to those experiencing hard times, especially with equipment like washing machines and fridges. The families it will help will have already done everything they can to support themselves but find it’s not enough and they need extra help.

“One hundred per cent of donations will go to people who are struggling to pay their bills.”

About 20 people attended the official launch, which was held at the d:two centre, in Market Place, where Nomad is based, on Wednesday last week. They were asked to help spread the word about the scheme.

Leaflets and posters to promote the scheme, sponsored by the Shanly Foundation, have been distributed to doctors’ surgeries, pubs, churches and golf clubs in Henley and the surrounding villages. Andy Jones, advice services manager for Henley Citizens Advice, said: “We are pleased to be working with Henley Lions Club and Nomad to help the people of Henley.”

Henley Mayor Julian Brookes has already agreed to give up his allowance.

He said: “People often say the winter fuel allowance should be means tested. This is a much better way to use it and I would invite people to contribute.

“I’m very pleased to be associated with this campaign and I wish it every success.”

Wendy Franklin, president of Henley Lions Club, said: “I think this is a fantastic thing we are starting and doing for the community.” The money collected will be paid directly to the energy suppliers of families in need.

Donations can be made by cheque or bank transfer or online at www.henleylions.org.uk