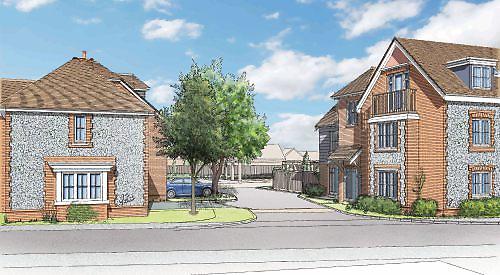 A DEVELOPER seeking to build 17 homes in Henley is refusing to comply with the town’s neighbourhood plan.

Ashill Land says the development off Greys Road would no longer be viable if 40 per cent of the properties were “affordable” as required by the plan.

Instead, it is proposing to build five affordable flats and 12 houses on the small commercial estate being sold by merchant drapers M Makower & Co.

But town councillors say this is unacceptable and is recommending the company’s planning application is rejected.

When Ashill first applied for permission in August Henley Town Council’s planning committee objected on the grounds of non-compliance, overdevelopment of the site, overlooking and scale and bulk, resulting in a loss of light.

Now the company has amended its plans, saying it has improved the design but says it can’t increase the proportion of affordable housing as the scheme would no longer be “deliverable”.

In a statement, Ashill said its view was supported in an assessment carried out by BNP Paribas, consultants to South Oxfordshire District Council, the planning authority.

It said: “BNP has concurred that even with the provision of five starter homes, as proposed by Ashill, the scheme would generate a deficit.

“Despite this, five of the 17 units are still proposed as affordable housing by Ashill, comprising two one-bedroom and three two-bedroom apartments, which would deliver an onsite provision of 29 per cent.”

The company says its design changes address the feedback and comments received from planning officers, town councillors and neighbouring residents.

Managing director Ben Boyce said: “The traditional design we are proposing has been carefully reconsidered and improved. We are also improving the mix of affordable homes.

“The improvements we have made to the overall design and layout include increasing the separation with neighbouring boundaries, reducing the height of some homes and delivering increased landscaping, which will further improve neighbouring amenity and outlook, particularly when compared with the site’s existing commercial use.

“Our amended plans will also deliver a new pedestrian link through the site and widen the public footpath along the Greys Road frontage.”

Ashill says the development would mean less traffic than currently visits the businesses on the commercial estate.

Planning manager Tracy Puttock also said that residents of nearby Sherwood Gardens had said the amended plans were a “great improvement” and the company had tried to address their concerns.

However, the planning committee has again objected.

Chairman Simon Smith said that supporting the application would “demean” the neighbourhood plan, adding: “We have to be seen to stand up and defend it.”

Mayor Julian Brookes added: “The neighbourhood plan is under severe attack. We have got to stand up and defend it.” Councillor Kellie Hinton said the company should “make” the development “more viable”.

The joint Henley and Harpsden neighbourhood plan, which names 11 sites for about 500 new homes and was approved at a referendum in March, says that developments should include 40 per cent affordable housing.

However, this has already been rejected by the district council as a reason for refusing planning permission when it approved McCarthy & Stone plans for 53 “extra care” flats for the elderly at the former Jet garage site in Reading Road.

The site was earmarked for 55 ordinary houses under the plan, which says that new developments should include homes for young people and those with limited income.

M Makower & Co, which has been based at this site since 1945, is to move to new premises.

Of the three tenant businesses, Schools Publishing has moved to the Thamesview industrial estate and Physiolistic is to move to Henley Rugby Club.

The development, which incorporates 116 to 118 Greys Road, would involve the demolition of the companies’ buildings and a house.