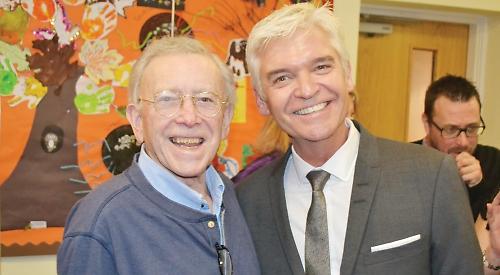 TELEVISION presenter Phillip Schofield blamed the Duke of Edinburgh for being late to the launch of a Henley charity’s new fund-raising initiative.

The Chiltern Centre for disabled children launched its new “Friends” scheme on Tuesday evening and Schofield, a patron of the charity, was the guest of honour.

But he turned up at the centre, off Greys Road, about 10 minutes late after being delayed in London.

The co-host of ITV’s This Morning apologised to the crowd of waiting staff, volunteers, supporters and families.

He said: “I’m sorry I’m late, I was with the Duke of Edinburgh — it’s a really good excuse!

“I’m making a documentary on the Duke of Edinburgh’s Award scheme. I was at St James’s Palace today waiting for him. You can’t really say, ‘will you hurry up, I’m going to be late’!”

Schofield, who lives in Fawley with his wife Steph, continued: “There’s nowhere I’d rather be. This is minutes away from where I live. I’m a patron and ambassador for all sorts of charities countrywide but it’s here that’s most important to me.”

The presenter praised the care and nurturing environment at the centre, which offers care for disabled children and young people and practical support and respite for their families.

He said: “Steph and I have been around here a number of times and watched it develop and seen the incredible work done here.

“I’m so proud to be part of it and have my name associated with it.”

The Friends scheme offers the charity’s supporters the chance to make a regular contribution of different amounts, large and small.

Schofield said: “You can set it up and then you can go on with your daily lives but we quietly remind you every month or every year.”

Schofield said he had spoken to one mother of a disabled boy about how much both he and she appreciated the centre.

“You could see what it meant to her to have this place,” he said. “He comes here, he’s stimulated, he’s looked after and she knows she can trust this extraordinary team.”

The Friends scheme has three membership levels — £5 a month, £180 a year and a suggested minimum gift of £500 a year.

All options offer automatic membership of the charity’s 100 Club prize draw and recognition of your contribution on a board of Friends in the centre’s reception area.

Schofield told guests he had thought of a fourth tier on his way to the centre, saying: “For £1,000 a year you become our lover! I don’t know what you get for it.” Paul Barret, the centre’s chairman of trustees, replied: “We’ll need to talk about that!”

Other guests included veteran singer Vince Hill, from Shiplake, who donated a cheque for almost £220 which was raised at a memorial event for his late wife Annie last month. Dr Chris Kelsey, who was president of the Rotary Club of Marlow last year, gave a cheque for £1,000 raised during his year in office.

Also present was Henley Swim founder Jeremy Laming, who swam 50 miles from Oxford to Henley with four others this summer, raising more than £8,000 for the charity. Emma Lerche-Thomsen, the centre’s Friends membership manager who devised the scheme, said it was designed to encourage regular giving.

She said: “It has taken careful thought, to be honest, it’s not something you launch quickly. The levels have got to be right to be attractive to a whole range of supporters. It’s Phillip’s passion that adds incredible weight to this tiny charity in Henley and I was absolutely thrilled when he became a patron. I couldn’t wish for any more to be honest.”

Mr Barrett said the charity was very grateful for the presenter’s support.

He said: “The Friends scheme is something we have been hoping to do for some time and very much wanted to involve our celebrity patron who is so well known and has got many millions of followers on Twitter.

“It was very much a question of waiting until he had a window of opportunity.

“Although we get amazing support from the local community as a whole, what we do like is a bedrock of individual supporters as friends who can pledge money and who can ensure we have a more secure financial future for the care we need to provide.”

Liz Deacon, the charity’s community fund-raiser, said: “Having someone as famous as Phillip just raises the profile of the whole centre. Anything that raises its profile and the work that’s done here is incredibly valuable to us.

“The Friends scheme enables us to get continued and regular support from key figures in the local community, which supplements a lot of the event-based fund-raising that we do.

“Having Phillip as our patron and having him at the launch was incredible. The support of a key local celebrity, reinforcing the vital work that the centre does, can only help drive the message home that we need people to support us,”

Henley Deputy Mayor Will Hamilton, who was also a guest, said: “This is a very important charity and the work they do is fantastic.

“They really do harness the sense of community in terms of helping children who have significant needs.”

Schofield has been a patron of the charity since 2010. He and his wife trekked to Machu Picchu in Peru in 2012 to raise funds and their daughter Ruby has volunteered at the centre.

The Chiltern Centre celebrated its 10th anniversary in 2013, a year after its future was secured following a successful appeal to raise £350,000.

The Building Our Future Appeal, which was supported by the Henley Standard, was launched when the centre had low cash reserves and was facing the threat of closure.

If you would like to be involved in the Friends scheme, or for more information, email Liz Deacon at liz@chilterncentre.org.uk