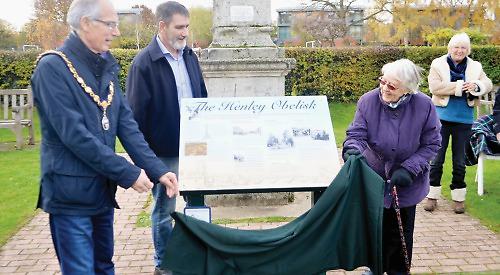 A PLAQUE celebrating Henley’s obelisk has been unveiled.

The information board tells the history of the Grade II listed monument from its construction in 1788 to the present day.

The landmark, which is about 15ft tall and made of Portland stone, has stood on the towpath at Mill Meadows since the early Seventies but was originally erected in Market Place as a symbol of civic pride.

It replaced a medieval stone cross which was demolished during modernisation of the town centre during the 1770s.

The old wooden Henley Bridge was replaced with the existing stone one at around the same time.

The obelisk was inscribed with the distances to Reading, Oxford and London and a water pump was built nearby to wash down the pavement after each Thursday market.

Two gas lamps were later affixed to its northern and southern faces.

In 1886 it was relocated to the junction of Northfield End and Marlow Road while a drinking fountain in memory of Henley rector Rev Greville Phillimore was built in its place. The fountain was moved to its current home outside St Mary’s Church in Hart Street in 1903.

When the Marlow Road junction was replaced by a mini-roundabout in 1970, the obelisk was dismantled and moved to the towpath, a short distance from its current location, where it was left in pieces and neglected.

In 1973, a group of teachers and pupils at Gillotts School in Henley joined forces with the town council to help restore it.

They built a full-sized replica from wood, which they coated in a mixture of paint and sand to mimic the stone texture, then loaded on to a lorry and drove to the town hall. Over a period of several weeks, the council would leave it in different locations to see how it looked. These included Falaise Square, the front of the town hall steps and the crossroads at the junction of Market Place and Hart Street.

It was eventually decided to leave the real obelisk at Mill Meadows as there were fears that it wouldn’t survive being transported again.

The plaque includes two photographs of the obelisk in Market Place and Northfield End and two others of the replica being transported.

Mrs King, of Makins Road, Henley, carried out the unveiling and was presented with a bunch of flowers.

She said: “It brings back a lot of happy memories for me. I remember the replica being driven around on a sunny day and my husband being interviewed about it for the BBC.”

Mr Pitcher, of Cromwell Road, Henley, said: “It’s great that the school’s work towards the community is being recognised as it was the first time we’d done something like that.

“I’m not sure we’d get away with it nowadays — there are too many fears about health and safety and too much emphasis on exam results.

“At the time we would take pupils out of classes to work on the replica. That just wouldn’t be allowed any more.”

Councillor Eggleton said: “It’s important that we’re sharing knowledge with the public about things that happened many years ago. We had no idea that this was so important historically when we did all that stuff at school.

“I remember the obelisk we made was an incredible likeness — if you had put them side by side, it would have been very hard to tell the difference.”

The £1,200 plaque is the third of its kind to be installed around Henley as part of a drive by Cllr Eggleton and Viv Greenwood, of the Henley Archaeological and Historical Group, who carried out the research.

Last year, a board in honour of Henley minister and inventor Humphrey Gainsborough was installed at the housing estate off Greys Road named after him.

In July, a plaque celebrating the Makins family’s contribution to Henley was unveiled at Makins recreation ground, also off Greys Road.

Mrs Greenwood, of West Street, hopes to make one for Henley Bridge next.

She said: “It was fascinating putting the story of the obelisk together. It’s a lengthy process and can be quite tedious but it’s worth it when you see what we’ve achieved today. We have so many visitors to Henley and this plaque really draws your eye.

“I have several friends who can remember playing on it when it was lying near the towpath — they would get told off by their mothers, who said it was disrespectful to climb on something that historic.

“You can see how it has been damaged over the years so I think this will be its final resting place. It’s too fragile to go anywhere else. I think it’s remarkable that it has survived, considering everything it has been through.”

Councillor Brookes said: “It’s very important to learn about the history of our town and its key landmarks.

“I imagine many people will have walked past the obelisk and wondered what it is and now they have the chance to find out.”