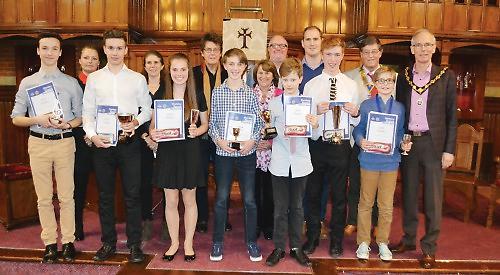 A FRENCH horn player blew his way to success in a new competition for young musicians.

Matthew Prior, 12, was one of seven children who performed in the final of the inaugural Henley Young Musician contest held at Christ Church in Reading Road.

The competition is a joint initiative between Henley Music School and the Rotary Club of Henley Bridge, which hope it will become an annual event and grow in popularity.

Sixteen teenagers entered the contest and took part in heats before Sunday’s final which featured two pianists, a cellist, a cornet player, a violinist and a trombone player as well as Matthew.

Each musician performed a piece of their choice for a panel of judges that included Huw Wiggin, a saxophonist and professor at the Royal Academy, from Shiplake, Jane Salmon, a professor at the Birmingham Conserv and Schubert Ensemble, from Henley, Christine Cairns, of the National Youth Choir, Mark Winn, a conductor and member of the Trinity College of Music, and radio presenter Mike Read, from Henley.

Matthew, from Newbury, was surprised to win.

He said: “I didn’t really expect it. I was quite confident but then I heard some of the other people and they sounded quite good as well.” His prize is the opportunity to perform a solo with the Henley Symphony Orchestra at its patrons evening in May.

Matthew, who has played the French horn for two years and also plays the recorder and piano, said: “I’ve never done that before so I’m looking forward to it. It’s a great opportunity.”

The final was attended by about 60 people, including Henley MP John Howell, Mayor Julian Brookes and Rotarians.

It also included a performance by Henley classical concert pianist Anita D’Attellis, who played a piece by Chopin.

Laura Reineke, founder of the music school, said: “We had a lovely afternoon and there was a really great mixture of instruments, ages, kids, the whole lot.

“Having people come to watch the kids and being able to hear what they have achieved at such a young age is fantastic.

“They have worked very hard. They have all practised their little hearts out and they have done brilliantly.

“We want to promote the competition throughout Henley and further afield as there isn’t anything like it in the area. There isn’t often an opportunity for children of this level to get together and play.

“I’m hoping that with the positivity from this year and the buzz we can create we’ll get more kids involved next year.”

Stefan Gawrysiak, president of the Rotary club, said he was impressed by the the quality of the performances.

“They were of an incredibly high standard,” he said. “The reason we decided to do this was to create a platform for young people to perform.

“We’re determined to make it an annual event and on this showing with the audience and the performers it surely will be.”

Mr Howell, who plays the organ, said: “The performances were absolutely outstanding.

“It’s a privilege to know that we have such ferocious young talent in the constituency and they are making such good use of it.

“My congratulations go to the organisers of this event because without it it’s difficult to see how young people would know they had the talent and the ability to express that talent.

“As a musician myself, it’s a great pleasure to see these people thoroughly enjoying themselves in playing what they like to play.”

Mr Read said: “There was a great variety of instruments and a lot of maturity and assured playing.

“Anything that encourages young musicians, or young talent of any sort, is fantastic.”