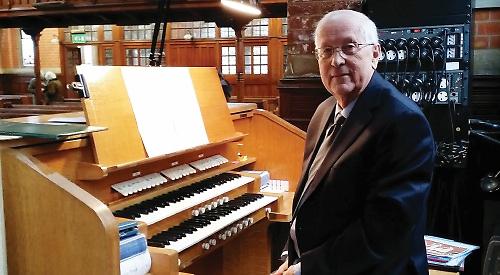 A PARTY was held to mark 50 years since the organist at Christ Church in Henley started.

Dr Brian Gegg, 85, was joined by family and friends for the surprise celebration following the morning service at the church in Reading Road on Sunday.

He has played the organ for more than 70 years and at the church on and off since 1966.

Dr Gegg said: “I had no idea about the party until halfway through the service, which was quite a surprise.

“The minister called me out, presented me with a gift and asked me to say a few words.”

He was taught how to play the piano by his aunt when he was teenager and later learned the organ with help from Stanley Harris, an organ builder from London, who worked as a surveyor during the Second World War in Cirencester, where Dr Gegg lived.

The youngster asked him to teach him at his congregational church where there was an organ with hand-blown bellows powered by boy scouts.

Mr Harris agreed as long as his pupil helped him build an electric blower. Dr Gegg moved to Reading in 1949 when his family relocated.

He attended Reading School, where his tutor arranged for him to become assistant organist at St Andrew’s Church in Sonning.

Dr Gegg met his wife Rosemary, a Sunday school teacher, at the church.

He trained as an optometrist at Wembley College in London and went on to run his own business called Brian Gegg & Partners that was based in Hart Street, Henley, for 30 years until he retired in 1996.

He then moved to the Cotswolds for 10 years before returning to the Henley and to Christ Church to play the organ once more.

Dr Gegg said: “I’ve been at Christ Church for five ministers and over that period they have asked me to play.

“I wouldn’t want to continue if I am not wanted. I’ve always liked helping other people where I can. If anyone asks me to play, I can’t refuse.”

Dr Gegg has played in radio broadcasts on BBC Oxford and BBC Gloucester and in 1976 he played the organ for a broadcast of Songs of Praise from Henley.