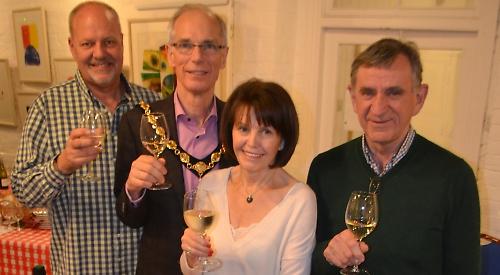 A wine tasting evening raised more than £500 for the Mayor of Henley’s chosen charities. The event at the Old Fire Station Gallery was in aid of the Riverside Counselling Service, the Henley YMCA and youth and community project Nomad.

Thirty-four people who attended took part in a blind wine tasting contest with the help of Martin Chapman, of Watlington Fine Wines. There were six mystery wines — tree red and three white — and the guests had to guess the colour, grape type and country of origin and were scored on their answers. There was a “wooden bottle opener” award for the lowest score.

Guests paid £15 each, which included a selection of cheeses to complement the wine, and there was a chance to buy wines. Simon Hearnden, of Berlin Walls Art Events, was showing original works and prints by emerging Berlin artists. The Mayor said: “It went very well and I think everybody enjoyed themselves. A few people walked in off the street to join us, which meant we had a full house. It’s this time of year that people tend to go out and buy their wines for the festive season.”

The total included the proceeds of a raffle with prizes including two tickets to the Henley Festival and dinner at Hotel du Vin and a percentage from the wine and art sales. Pictured, left to right, Simon Hearnden, Mayor Julian Brookes, Mayoress Gabriele Brookes and Martin Chapman, of Watlington Fine Wines