Lump of oak from Saxon times found by water workmen 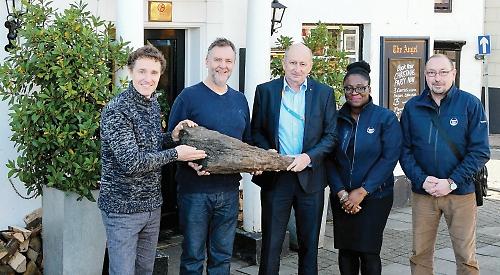 A PIECE of oak timber dating from Saxon times was discovered during work on a flood alleviation scheme in Henley.

The 2ft 6in long artefact was recovered during the excavation of a new manhole beside the Angel on the Bridge pub in Thames Side by Thames Water.

It is thought to be the remains of a Saxon revetment, a structure built to hold back the bank of the River Thames. Radio carbon dating set it at around 990AD.

David Bonner, of Network Archaeology, who investigated the find, said: “This suggests there was riverside activity in Henley around the early 11th century.

“That activity could be trade or commercial, which would also suggest Henley was a settlement in Saxon times. Saxon finds are rare nationally, so this is a very significant find.” Official histories of Henley suggest that the first recorded activity on the site dates from 1179 and the reign of Henry II.

Thames Water has donated the find to Mark Dunlop, landlord of the pub.

He said: “The pub itself is very old and this piece of timber must be at least three times older than the building. I am really pleased to accept this from Thames Water and look forward to displaying it in the pub. I’m sure it will fascinate both locals and tourists in the future.”

A year ago, archaeologists unearthed what is believed to be a piece of Henley’s medieval bridge. A chunk of wood also about 2ft 6in long was dug up near the same pub by Thames Water workmen carrying out sewer repairs.