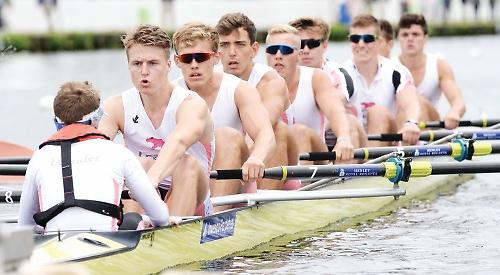 FOUR out of six local crews won their races on the opening day of this year’s Henley Royal Regatta.

Three crews from Henley’s Leander Club, including two from its development squad the Star and Arrow Club, made it through the opening rounds of the Fawley and Thames Challenge Cups, while a Shiplake College eight won the first round of the Princess Elizabeth Challenge Cup.

Leander beat Worcester Rowing Club by two-and-a-half lengths in the opening race of the Thames Cup. They were leading by a canvas as they entered the booms and ahead by half a length at the 500m mark.

The eight were even further ahead by the enclosures and were able to maintain a steady pace until the finish line.

Star and Arrow’s A crew beat The King’s School, Worcester, in the Fawley Cup by two-and-a-half lengths.

Despite a strong start by Star and Arrow, their rivals managed to narrow the gap and the race remained close until they reached Upper Thames Rowing Club, at which point the Leander crew surged ahead by a length. By the stewards’ enclosure they had further increased their lead.

Chris Daniell, who sat at stroke, said: “We had a race plan which I think we executed well. The start was a bit washy but then we got a nice rhythm going.

“We raced them earlier in the year and they beat us by two lengths so we thought it was going to be a close race. It’s pretty tough to get back into it once you’re behind.”

Also in the Fawley Cup, Star and Arrow’s B crew beat Maidenhead Rowing Club by two-and-a-quarter lengths. They took an early lead and had increased this further by the regatta enclosure.

Hadley Butcher, who sat at number two, said: “We knew they would be fast off the start so we let them do their thing and stayed with them. When it came to the middle stages of the race, we started chunking it away from them and just kept it going until we had clear water at the end.”

Shiplake College started strong in their race and finished two-thirds of a length ahead after a close-fought battle with Westminster School.

Headmaster Gregg Davies said: “I’m over the moon and so proud of them. I cycled alongside them for the first 400 metres and then got my phone out and watched the rest.

“When we won I did have a few tears but I’d composed myself by the time I got back.

“We finished third at the National Schools Regatta and were selected, which was brilliant. We drew the crew that finished fourth at National Schools in the first round and it was always going to be a tough race. No other selected crew had a race as tough as that.

“My feelings go out to Westminster. To be the fourth best crew in the country and go out on the first day is very tough. We’re just taking it one race at a time and are so grateful for the support that we get. We know everybody in Henley gets behind us.”

But an Upper Thames Rowing Club eight, who were the first local crew to hit the water on Wednesday, lost in the Thames Cup to Royal Chester Rowing Club’s A crew, who won by three-quarters of a length.

By the time they passed their clubhouse, the Upper Thames crew were a length behind. As supporters cheered them on, they surged forward to claim a quarter-length lead but could not maintain it.

Jake Richards, who sat in the five seat, said: “I don’t think we got the start we wanted — we were slightly down off the start which kind of put us into a fight.

“We were working on our rhythm and we didn’t quite execute that and the boys from Chester held on the entire way. Despite the result, I think we’re quite pleased, especially considering how far we’ve come in the last few weeks. We put this crew together quite recently.

“The loss itself isn’t disappointing, it’s just that we didn’t execute our race as we would have liked to.”

A Reading Blue Coat School eight lost to Abingdon School by two lengths in the first race of the Princess Elizabeth Cup. Abingdon were half a length ahead by the top of Temple Island and more than three lengths ahead by the Fawley mark. Blue Coat fought back and narrowed the gap but failed to close it.

Blue Coat cox Freddie Bryce said: “We did what we came out to do. We know Abingdon are a strong school but we raced how we wanted to and didn’t leave anything on the water.

“There was a lot of wash but the boys dealt with it well and I’m proud of them.”

Ben Grainger, who sat at stroke, added: “We did our best and I’m happy with our performance but Abingdon were a stronger crew. The result was almost expected but we’re very proud to get this far.

“We tried to push them off the start to scare them a little bit but they’re a big crew. They had a fantastic start and used that to their advantage. This is my last year at Blue Coat so it was a good race to finish on.”