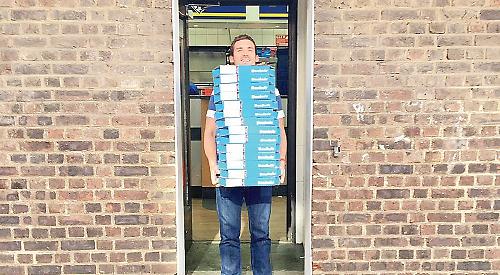 BUSINESSES in Henley are celebrating after a boost in their trade as a result of this year’s royal regatta.

Shops, pubs and cafés all benefited from the thousands of visitors who came into the town centre while attending the five-day rowing event.

Some traders said they had enjoyed their best regatta week trade in years.

Café and coffee shops were particularly busy in the mornings and at lunchtime.

Lorraine Hillier, who runs Hot Gossip coffee house in Friday Street and Upstairs and Downstairs tea room in Bell Street, said: “We did our best regatta business in years. We sold lots of cold drinks and ice cream. I think it was because the weather was mixed. When it is a bit dull and the sun isn’t out it brings people into the town.

“There is nothing more beautiful than the regatta when the sun is out but it’s a fact that when it’s cloudy we do better.”

Hattie Barford, manager of the Chocolate Café in Thames Side, agreed that her busiest time was on the first two days of the regatta when it was often overcast.

“We are on the way to the site for people coming in on the train who need something to eat,” she said.

“The busiest time is a three-hour period in the morning when people are coming into the town and our breakfast trade goes up.

“Usually they want a full English or eggs benedict.

“We get groups of rowers and spectators who come to us every year. Generally we can predict how things are going to go.”

Annie Gray, manager of Spoon in Bell Street, said the café was “manic” all week.

She said: “It was a really successful week and given that we are new that’s very positive. We are very happy. We had a lot of rowers come in for breakfast as we offered scrambled eggs and smoked salmon. We also had a special regatta breakfast with champagne which was very popular.”

Shaun Dickens, who runs the Boathouse restaurant in Station Road, said it had been his busiest week since he opened the business in March 2013.

He benefited from being able to use his outdoor terrace in the evening after recently having a planning restriction lifted.

Mr Dickens said he had 200 covers on Friday — a one-day record for the restaurant — and 700 across the five days. He thanked his staff by buying them all takeaway pizzas.

He tweeted: “Records smashed all over the place and, more importantly, I was proud of every dish that left the kitchen.”

Pubs were also busy, especially at lunchtimes and in the evenings.

Neil Ainsworth, who runs the Argyll pub in Market Place, said: “We were busy throughout the event and exceptionally busy on the food side of the business. We have a lot of customers who come and visit us every year.

“We’ve been here 12 years and this may be one of the busiest regattas we have had. We were at capacity for most of the weekend.”

He said licensees liaised with each other and the police to ensure there were no major problems with drinkers’ behaviour.

“Everybody worked together to help it run smoothly and professionally,” said Mr Ainsworth. “When you’re dealing with this many people that helps.” Mr Ainsworth said many visitors stayed in the pub to watch the racing live on television rather than go back to the river,

“Some people may think the regatta is all about the course but it’s about the town as well,” he added.

The Little Angel, the nearest pub to the regatta course, turned its car park into a makeshift “garden” with tables and chairs to cope with demand.

Manager Daniel Cattanach said: “We had a hugely successful regatta. We had great sales both at both lunchtime and dinner time.”

Juliette Campbell, who recently took over Boatique, a nautical-themed gift and clothes shop in Friday Street, said: “It was fantastic over the weekend. Friday and Saturday were super and footfall on those days was high.

“I still had a lot of my usual customers coming in and there were a lot of Americans, who are always a delight to deal with.

“I am new so that’s all I can say really but I am happy with how I did.”

Laurence Morris, who runs Laurence Menswear in Duke Street, said his sales were on a par with previous years but he felt that footfall was down.

He said: “I feel there wasn’t much effort during the week to bring people into the town as there has been in the past. I think there needs to be signs and information at the regatta site to encourage people to come.”

“In general it was not a bad week and sales leading up to the regatta were good. I think people were probably buying early, knowing they were going to the regatta.”

Town manager Helen Barnett said the feedback she had received from retailers was that trade was better in the early part of last week but Saturday was quieter.

“I’m not quite sure why — there is no rhyme or reason to some of these things,” she said. “It’s a quandary about how to get more people to come into the town during the regatta.

“It seems some retailers have done better than others and I think it does depend on what they are selling. I know Cara and Mint Velvet were selling a lot of flat shoes and the same for Monsoon.”

Ms Barnett said she would be talking about regatta trade at the next retailers’ meeting in October.